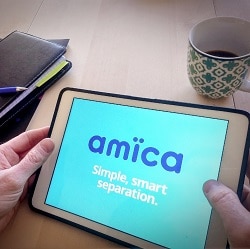 The Australian government has launched a A$3m (£1.6m) online platform which uses artificial intelligence (AI) to help separating couples divide up their property.

Amica, which can also help couples agree parenting arrangements, is designed for those whose relationships are “relatively amicable” and situation is not complex. It should suit “many separating couples”, the government said.

It cannot be used to obtain a divorce.

The website produces a suggested split of the property, having taken into account their assets and particular circumstances, agreements commonly reached by other couples in similar situations and “how courts generally handle disputes of this nature”.

Developed by National Legal Aid and the Legal Services Commission of South Australia, its dispute resolution function is free until the end of the year, when it will be replaced by a fee of A$165 to A$440 per couple.

Amica is not suitable for all couples and they are told it “cannot replace the expert advice from lawyers” – but it can “empower many couples to better manage separation and reduce the areas in which they disagree”.

The website offers free information for separating couples, a platform for messaging their former partner, a step-by-step approach to help them reach agreements, a simple method of recording agreements, and a web chat function called ‘ask amica’.

The government has said it expects amica not only to reduce legal bills, but reduce pressure on the family law courts.

Gabrielle Canny, director of the NLA and head of the project, said: “Amica encourages people to log-on instead of lawyering up. There are almost 50,000 divorces each year in Australia.

“It offers a step-by-step approach to help separating couples reach amicable agreements and record them in plain language on a secure digital platform.”

She went on: “This is not a pie-in-the-sky project dreamed up by computer boffins and pointy-headed lawyers in ivory towers.

“Right from the start, we’ve been guided by ongoing feedback from everyday people with lived experience of everyday family law problems. They helped us design, build and test amica.”

Holland’s pioneering Rechtwijzer system, a full-scale online dispute resolution system for separating couples was scaled back in 2017 after disappointing take-up.

Earlier this month, UK company Amicable – which aims to help separating couples without needing lawyers – announced earlier this month that it had raised £488,000 in new funding.