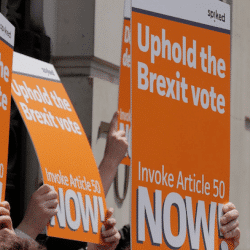 Cuts to legal aid and stigmatisation of clients seeking asylum arising from Brexit have added to the emotional toll suffered by lawyers practising in the field, research has found.

Building on earlier research detailing the strain borne by lawyers having to represent people describing harrowing events before reaching sanctuary in this country, the findings included legal representatives displaying emotional detachment and cynicism about client narratives in order to protect themselves.

The qualitative research was the first part of work to discover if the situation since LASPO had worsened – the second will focus on whether training, education and workplace support could help practitioners – by Neil Graffin, a law lecturer at the Open University.

Mr Graffin conducted 10 interviews with asylum practitioners who routinely heard stories of persecution and other traumatic narratives, including about sexual assault, female genital mutilation and torture, and whose clients sometimes committed suicide.

Practitioners told him of the stress they felt, and sometimes burnout in themselves or others. Burnout could be manifested in a lack of energy in pursuing clients’ cases.

However, there were also practitioners who were inspired by clients, or motivated to work harder to achieve positive outcomes.

One participant said: “You have the privilege [of] being exposed to a side of life that most people don’t know about and maybe aren’t equipped to deal with.

“And that’s a very… deep honour to be able to help people in their hour of need.”

Findings included that cynicism or disbelief of client narratives could actually be advantageous in representing asylum claimants by creating a “healthy” protective emotional detachment, although such doubt could also have “negative implications” for representation if scepticism went too far.

Mr Graffin concluded: “What was very clear was that practitioners are asked to perform emotionally demanding work, with a vulnerable client group, in an environment where there are a multitude of constraints on their resources, external pressures and stigma towards the people them try to help. This undoubtedly takes its toll.”

The difficulty of the work “necessitates a wider re-assessment of the structural systems in which practitioners operate, support mechanisms that are in place, and training and education provided to these professionals,” he added.

The climate around Brexit was blamed for exacerbating tensions over immigration, with discourse about immigrants and asylum seekers frequently portraying them as “an economic and cultural threat”.

He said: “This type of rhetoric, it was clear, had a direct impact on some of those who were interviewed.”

Adding to the strain of practising in the field were concerns over funding, large caseloads and powerlessness to help needy clients.

One practitioner voiced frustration over the financial rewards relative to other kinds of work: “When you look at how [much] many corporate lawyers get paid, it’s obscene to think that we’re getting paid so little for doing all this work.”