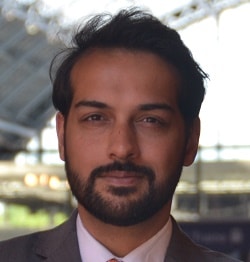 A barrister whose charity, regulated as a law firm by the Bar Standards Board (BSB), was dissolved at the end of last year due to funding problems, has set up both a conventional BSB firm and a pioneering university law project to help immigration detainees.

Ousman Noor, founder of King’s Cross Barristers, said he would be doing much of the same immigration work on a paid-for basis, while teaching law students at SOAS, University of London one day a week.

The project involves students in helping detainees make applications for exceptional funding from the Legal Aid Agency and is understood to be the first of its kind. Some of the students may have to visit clients in prison.

Mr Noor’s charity, the Habeas Corpus Project, provided free representation for migrants and asylum seekers challenging unlawful detention before it dissolved in December 2016, only the second BSB entity to be dissolved.

Mr Noor said project continued to function as a charity, regulated by the Charity Commission, until August this year. He told Legal Futures: “I was very frustrated by the lack of support for access to justice and quite upset that insufficient efforts were being made to provide representation for immigration detainees.

“Conditions were only getting worse, while my workload was increasing. I decided that I could not carry on any longer if I was to avoid my own descent into trauma.”

Mr Noor set up Open Counsel last month, which operates as a BSB entity and trades as King’s Cross Barristers, with an office only a few minutes from the station.

He said the majority of his work was centred on immigration, detention and asylum, but the firm also offers services in public law – including judicial review, family, property and contract law – and motoring offences.

Mr Noor said he worked alongside a caseworker and administrative secretary and would be recruiting a solicitor in January next year.

“As I’m a barrister, it made sense for me to stay with my regulatory body instead of going to the SRA,” he said.

Mr Noor said he works one day a week as a senior teaching fellow at SOAS, part of the University of London, teaching an immigration and asylum law module.

His 30 students – most of them studying law, but some human rights – will help immigration detainees apply for exceptional case funding from the Legal Aid Agency in a project launched last week.

“The application process is so complicated that you need a lawyer to get a lawyer,” Mr Noor said. “The number of cases which have obtained exceptional funding is very small.”

Mr Noor said that the charity Bail for Immigration Detainees would refer suitable cases to him, which he would allocate to his students.

“They tell me they could refer four cases a week, but I said we would do one a week until we can increase our capabilities.”

Mr Noor said the SOAS students may have to visit clients in prison, since some of them were being held there after their sentences had expired and might not have access to a phone.

He added: “Now I have the benefit of working with the university, I don’t feel completely isolated and I have better support.”