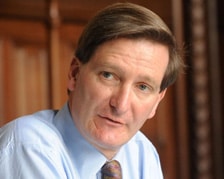 Grieve: service provided by the legal profession is taken for granted

Speculation about the views of the Attorney General, Dominic Grieve QC, on the government’s proposals to reform legal aid has intensified after he conspicuously failed to express support for them when responding to a letter of protest sent by 145 Treasury counsel.

Mr Grieve instead made it clear that “policy in this area is owned by the Lord Chancellor and not me”.

And he pledged to continue drawing to Chris Grayling’s attention “the concerns that have been expressed to me”.

Mr Grieve concluded: “I will endeavour to ensure, as far as I can, that the decision he reaches in due course is a fully informed one.”

Describing the letter as “astonishing”, David Allen Green, a high-profile media solicitor who is also legal correspondent for the New Stateman, wrote on his personal blog last night that it was “the least enthusiastic statement on the proposals I suspect the Attorney-General could have got away with, and remain in government”.

He said the last sentence “suggests to me that the Attorney-General is not personally confident that the Lord Chancellor will make a fully informed decision. If this is correct, then this indicates that the government’s own senior law officer is not completely convinced that the Ministry of Justice will actually make a policy decision based on the appropriate evidential basis”.

Barrister Adam Wagner of One Crown Office Row, one of the authors of the Human Rights Blog and a signatory to the original letter, tweeted that he read the letter as saying “I can’t agree with you in writing but please keep pushing as hard as you can”.

Mr Grieve criticised the concept of price competitive tendering while in opposition. In his letter to Treasury counsel, he recounted an address he made to the Bar Council in April: “I emphasised that this was a consultation exercise carried out by the Lord Chancellor. He, like other ministers, had savings that his department had to absorb and where savings are to be made depends on where priorities lay.

“I said that on the whole, the service provided by the legal profession is taken for granted and that there was a general view that whilst lawyers complained about every financial cut imposed, the edifice will continue to function as it has in the past. I said that it was apparent now, from listening to what had been said at the meeting, that many present took the view that these proposals would cause the edifice to collapse.

“In my view, it was vital that the Bar use the consultation exercise to explain why these proposals will damage the justice system and what the overall impact will be.”

Mr Grieve also said he recognised that the concerns expressed by barristers “go well beyond the personal, financial implications… but extend to the potential impact on the quality of the justice system this country is rightly proud of”.

The letter was published by the anonymous ‘Legal Aid Changes’ blog.