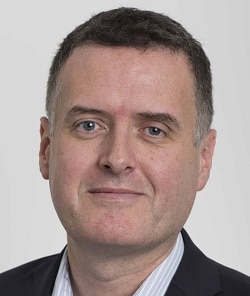 Chief executive Garry Mackay told Legal Futures that the firm would also shortly be announcing its second external investment after legal recruitment app Route1 – this time in a clothing retailer.

“We can’t be complacent about being the biggest firm in the south-west,” Mr Mackay said. “We want to continue to be the biggest, and the only way to do that is to be ahead of the game.

“Our London office is growing and we want to expand our horizons in the UK and beyond.

“Clients expectations are changing, and we need to be able to meet them. We want to provide an integrated service, and it’s more difficult to that with a traditional regulatory structure.”

Ashfords set up a regulatory consultancy for businesses in 2014, a patent agency in 2015 and launched the contract management and data room service Ruby Datum in a joint venture this summer.

Mr Mackay said becoming an ABS, and bringing non-lawyers into the firm’s management, would allow Ashfords to bring these new businesses “a lot closer” to the legal offering.

“Individuals can now benefit in their career progression from being part of a successful law firm.”

M Mackay said ABS status could also mean external investment for the legal practice, though it was more likely to be a feature of the spin-off businesses.

When it came to the firm’s own external investments, he declined to elaborate on the clothing retailer Ashfords would soon be backing, but said details would be announced within the next two months.

Mr Mackay added that an online dispute resolution platform for businesses would be launched by the end of the year.

He praised the firm’s regulatory team, headed by partner and head of legal practice Sam Palmer, and the Solicitors Regulation Authority, for turning round the firm’s ABS application in only 16 days. “We put together a very clear application, and they responded.”

Meanwhile, the founder of Manchester commercial firm Monarch Solicitors, Shazda Ahmed, said her firm had become an ABS to allow her husband Zahoor, the office manager, to become its second director.

Ms Ahmed said the firm’s business services and property departments were thriving, and she was in the process of recruiting a property and a litigation solicitor to add to her four paralegals and three support staff.

“If the service is good and there are fixed fees, the client has nothing to complain about,” she said. “Where we can estimate the cost of a piece of work, we offer a fixed fee.”

Ms Ahmed worked for the Insolvency Service as an examiner, and for HMRC, before launching the firm in 2014.

Monarch offers SME clients a ‘legal helpline’, where they pay in advance for up to 60 minutes of advice on an individual issue. Ms Ahmed said SMEs could have as many different “burning issues” as they liked, but were limited to one a day and would move to an hourly rate if they needed further help on the same one.

“If you have the right strategy, it is inevitable that your firm will grow if the economy is alright,” she said.

“I can only see a lot of opportunities arising out of Brexit – for solicitors anyway. There are going to be so many changes, and clients will need upfront advice to avoid getting themselves into trouble.

“Whether it’s company law, taxation issues, employment law or contracts, SMEs will need help to figure it all out.”