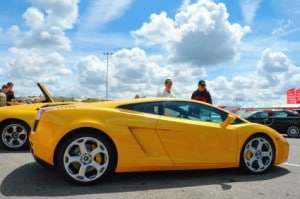 Conviction: a Lamborghini Gallardo like this one was sold in breach of a freezing order

The Court of Appeal yesterday quashed the conviction of a solicitor jailed for fraud and money laundering in £650,000 worth of property transactions.

Benjamin Jason Cornelius, 38, from Swansea, had been found guilty of 16 counts relating to eight buy-to-let transactions on which he had acted for both the buyers and the mortgagor, Mortgage Express, while at the same time secretly providing the buyers with bridging loans.

As security for each loan he had required a declaration of trust that essentially provided for repayment when the purchaser subsequently obtained their mortgage. He received cash sums from the purchasers for assisting them, while as a solicitor at W Parry & Co in Swansea his salary was related to the fees he generated. There was no suggestion that the firm knew what was going on.

On conviction in the Crown Court in March 2011, he was sentenced to four years’ imprisonment on each count, to run concurrently, with a consecutive sentence of eight months for perverting the course of justice; he had sold his £85,000 Lamborghini Gallardo sports car while it was subject to a restraint order under the Proceeds of Crime Act 2002.

In the Court of Appeal the case turned on whether Mr Cornelius had in fact made false representations on the certificates of title, specifically that there were no other charges or “onerous encumbrances”, and that he was not interested in the property as mortgagor.

The court, led by Sir John Thomas, president of the Queen’s Bench Division, decided that the declaration of trust did not amount to an onerous encumbrance, while the term ‘mortgagor’ had a technical meaning and Mr Cornelius did not grant the mortgage.

As a result, both the fraud and money laundering convictions were quashed, and the court refused to substitute a verdict of attempted fraud.

The conviction for conspiracy to pervert the course of justice, to which Mr Cornelius had pleaded guilty, was unaffected but as he had served the sentence for that count, the Court of Appeal said he was entitled to be released.

Sir John Thomas concluded: “The Crown applied for a re-trial in the event we quashed the convictions and did not exercise our powers of substitution. We do not consider it is appropriate to order a re-trial. The Crown was in error in failing to identify the correct basis for charging.

“The appellant has now spent almost a year in custody. Given his conviction for perverting the course of justice, quite apart from his conduct in these transactions, it is unlikely that he will ever be permitted to practise again.”

A spokesman for the Solicitors Regulation Authority said: “We’re currently awaiting confirmation of a date for a hearing for Mr Cornelius from the Solicitors Disciplinary Tribunal.”