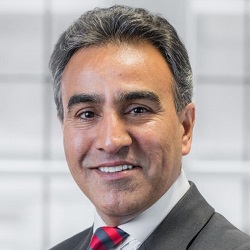 The “prevailing mood” among criminal defence barristers is one of “visceral anger and despair” and it is time to draw a line in the sand, the new chair of the Criminal Bar Association warned yesterday.

An uncompromising Jo Sidhu QC said the delivery of criminal justice depended on the capacity of the women and men who upheld it. “That capacity is utterly exhausted. We can do no more.”

In his first message to the association, he continued: “We find ourselves in uncharted territory. Every single day trials are stood out for lack of available counsel or because they are stacked with no realistic prospect of being heard.

“The pleas of our clerks are ignored, forcing cases to be returned at the eleventh hour with scant regard to the interests of complainants and defendants alike.

“Accepting returns has become a veritable lottery in which sleep is abandoned in order to prepare for a trial the following day that often fails to proceed, leaving our advocates frustrated and unrewarded.”

The silk, who practises from No5 Chambers and 25 Bedford Row, said it would take “years” for the vast majority of barristers to recover the income they lost during lockdown.

“Many have already voted with their feet and who can blame them?… They are lost to us because of repeated failures by government to invest in a beleaguered public service. Those who remain face the dismal prospect of trying to sustain practices that are barely viable.”

Mr Sidhu said the profession’s leadership now had a duty, as never before, “to draw a line”.

He explained: “We await the [criminal legal aid review] report of Sir Christopher Bellamy. We have been patient beyond measure.

“Without a significant and substantial increase to our pay the list of casualties from the criminal Bar will only get longer and the exodus will be permanent. How then will our precious [criminal justice system] meet the relentless demands placed upon it now and in the future?…

“Over the coming months there will be difficult decisions for us to take and no options will be set aside.”

Though pay was his overriding priority, Mr Sidhu said he would also be pushing for a national protocol on the use of remote hearings – their introduction was “one of the few welcome changes precipitated by last year’s disruption”, particularly for those with caring responsibilities.

“The present position, where different courts across our circuits operate different protocols, creates inconsistency and confusion for counsel.”

At the same time, the association would remain firmly opposed to the introduction of extended operating hours, recently revived under the new guise of ‘temporary operating arrangements’.

Mr Sidhu noted that, to date, no resident judge has signalled an intention to deploy extended hours “and we hope that this reluctance reflects a recognition amongst our judiciary that criminal barristers have already been stretched to breaking point”.

His other priority was “ensuring that the criminal Bar remains open and accessible to new entrants from the widest range of backgrounds”.