All talk, no action? Most law firms in merger negotiations, but few end up in deals 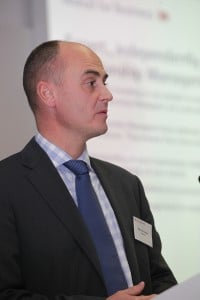 Merger and acquisition (M&A) talks are rife among law firms, although there is little evidence of many making it through to a deal, new research has suggested.

According to the survey by NatWest, 62% of the 127 solicitors polled said their firms had received or made M&A approaches in the past year, while 58% said their firms are likely or very likely to enter into M&A discussions in the next 12 months.

However, Steve Arundale, head of professionals at NatWest, told Legal Futures that while mergers are happening between the large firms, very few are among small and medium-sized practices.

“They probably work out that it’s more complicated than they imagine, and are not willing to invest the time, resources and money into doing it properly,” he said.

The survey – which was taken by delegates at NatWest’s 2012 legal conferences in association with business development specialists Huthwaite Legal – found that nearly half reported that their firms have reduced their cost structure over the past year – although a quarter said it had increased. General administration, headcount and office space were the main targets of costs cutting.

There was evidence of the growth of fixed fees, with 30% of delegates saying they account for the majority of their firms’ overall fees, while they claimed that most fee-earners in their firms were open to discussions about more creative fee arrangements (although 21% either avoid the subject or simply increase discounts).

Mr Arundale warned firms against purely cutting headcount in a bid to reduce costs without addressing customer service – he suggested that they should look at alternatives such as outsourcing instead – while the failure to conduct client satisfaction surveys was evidence of “lawyers losing their grasp of what clients want from them”.

Nonetheless, he argued that “there is still an opportunity for firms to put their arms around their customers and keep them loyal. If you don’t do regular satisfaction surveys and ask clients what they want, firms are going to let a massive opportunity pass them by.”

The survey reported that 90% of solicitors saw their job as principally a business, rather than a vocation – while 86% said their firm was run as a business, with the rest seeing it as a group of lawyers working under the same name and pooling profits.

Nearly half (45%) said their firms’ fee income had increased over the past two years, 35% said it had stayed the same and 21% said it had fallen.