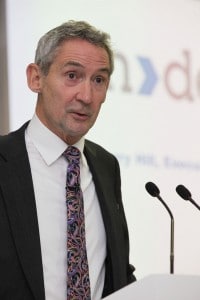 In-deed Online plc – the first listed company to buy a law firm – is now set to become the first alternative business structure (ABS) casualty after announcing plans to sell the practice back to one of its founders along with the rest of the online conveyancing company’s business.

Set up two years ago by Rightmove founder Harry Hill, the AIM-listed company has agreed to dispose of Runnett & Co, an ABS licensed by the Council for Licensed Conveyancers, to Matthew Lewis for £1.

The sale also includes the In-Deed website and intellectual property, and the company has agreed to pay £325,000 upon completion to fund working capital and restructuring costs.

Mr Hill, who also founded Countrywide Property Lawyers, told Legal Futures that he would not return to the legal market “while I have two eyes in my head”.

“We entered into this with quite of lot of enthusiasm and ended up with quite a lot of deflation,” he said.

As the transaction represents the disposal of substantially all of In-Deed’s business, it is subject to shareholder approval at a general meeting. Following completion, In-Deed will hold net cash of £900,000 and no debt, as well as tax losses amounting to approximately £2.8m.

A statement issued to AIM on Friday said: “The assets to be disposed of contributed the majority of the company’s last reported loss before tax. The directors will hold discussions with shareholders as to whether the company will invest the remaining cash or be wound up with cash distributed to shareholders.

“Following this consultation, should the company decide to seek investment opportunities rather the return the cash, the company will set out the details of its investing policy in accordance with the AIM rules in the shareholder circular.”

Mr Hill added: “We have had three approaches from companies interested in reversing into the clean cash shell that In-Deed will be, assuming shareholders approve our plan to sell all our legal businesses to Matthew Lewis. Together with Numis Securities we will consider the merits of each approach and if appropriate discuss the same with our major shareholders.” None of the approaches involve conveyancing, he said.

Nobody had lost out except for the shareholders – of which he and co-founder Peter Gordon are the second largest with 8.5% each – and Mr Hill said he regretted the losses other shareholders had suffered.

In-Deed initially started life as a conveyancing portal promoted through major property websites, using TV property guru Phil Spencer as its public face. It sought to distinguish itself on service quality rather than price and charged customers a transparent one-off “service management” cost of £200 + VAT, rather than seeking a referral fee from the panel solicitor.

Mr Hill said the company had underestimated the “price resistance” from consumers in the face of cut-price online conveyancing deals that were not transparent about the other costs that formed part of the transaction, and as a result the portals had delivered far less business than expected.

“We thought that people would take more time and trouble in choosing a lawyer than they actually did,” he said.

The company then changed to a B2B strategy and bought Runnett, a top-10 conveyancer by volume, a year ago. Mr Hill said that while the London end of the business had done “very well”, the south Wales base had been hit by staff departures, which in turn reduced service levels and eventually turned a profit into a loss.

The hope had been to spread the “fixed costs” of regulation across a few law firms, but In-Deed had been unable to find practices with balance sheets worth buying.

Though the London operation could have continued to run the 80-100 cases a month the website now generates and made a modest profit, he said that was not the aim of In-Deed when it launched – at the time he said the ambition was to become the market leader within three years.

The entrepreneur has previously claimed that unsustainable pricing meant that most conveyancing firms are “bust”. He said on Friday that “this is a very difficult business to make money in because the margins are very tight – the distributor [mainly estate agents] takes 60-80% of the fee”. He described the conveyancing market as “heavily dysfunctional”.

A spokesman for the Council for Licensed Conveyancers said: “The CLC has been kept informed of developments by the management of Runnetts. We have no immediate concerns but will be in close contact with the firm for the next few weeks.

“All business innovation in any sector involves risk and some business ideas may not work out. This case appears to be an example of orderly and well-managed change and we will continue to ensure the consumer interest is protected.”