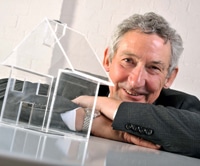 Hill: ambition remains to become one of the largest providers of conveyancing services

AIM-listed online conveyancing company In-Deed – which last year became the first business to announce its intention to invest in law firms – has today begun its acquisition programme after admitting that its direct-to-consumer model is not growing as quickly as hoped.

The company – which wants to build a leading consumer legal brand and intends to become an alternative business structure – has acquired 100% of the issued share capital of Runnett & Co, a firm of licensed conveyancers headquartered in Bridgend which is among the top 10 conveyancing firms in England and Wales as measured by returns to the Land Registry.

Runnetts’ clients are predominantly sourced through long-standing relationships with some of the UK’s largest estate agencies. Unaudited pro forma management accounts for the year to 31 March 2012 show operating profits of £245,000 on sales of £3.9m. Total consideration is set at five times average taxed profits over the four years post completion, with a cap of £4m.

The initial payment for the shares of founding shareholders Matthew Lewis and Paul Thomas is £225,000 in cash plus repayment of £350,000 of directors’ loans. Subsequent payments will be determined by actual profits and a proportion may be satisfied with In-Deed shares at the election of the board.

In-Deed said that its direct-to-consumer channel “has grown more slowly than was hoped” when it listed last June, and the acquisition of Runnetts gives the company “immediate scale in the UK conveyancing market”.

In a statement it said: “It is envisaged that the skills of the In-Deed team can make a significant contribution to growing Runnetts’ sales as well as improving efficiency of the current operations.

“In-Deed will continue to develop its direct-to-consumer channel, and work from this will be increasingly undertaken by Runnetts, but it will also focus on the expansion of the business servicing corporate estate agencies. The London operations of Runnetts will be rebranded and focus on the independent estate agents within the M25 where personal service and local presence are important, and margins are attractive.”

In-Deed chairman Harry Hill, the founder of Rightmove, said: “Some months ago we made it clear that our consumer business was not growing fast enough and that therefore we would explore the opportunity to acquire high-quality and profitable conveyancing companies. Runnetts is exactly that and we are truly excited at the prospect of making it part of the In-Deed business.

“Not only does it give us immediate scale but it diversifies our distribution channels and takes us a step further towards creating a market-leading conveyancing business.

“Our ambition remains to become one of, if not the, largest high-quality provider of conveyancing services in the UK. To this end, we continue to progress our discussions with law firms, conveyancing firms and estate agency companies.”

In-Deed’s shares were listed at 42p and peaked at 59p shortly afterwards. However, this month they fell to 37.5p, their lowest yet.