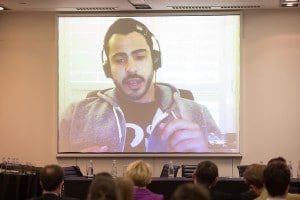 Andrew Arruda on screen at this week’s conference

Lawyers routinely over-estimate the current state of machine-learning computers but under-estimate their potential future capabilities, according to the chief executive of ROSS Intelligence, the company building an application billed as the world’s first “artificially intelligent attorney”.

Andrew Arruda also revealed that ROSS, which is built on top of IBM’s cognitive computer Watson, has entered an expanded pilot phase beyond the initial 20 large law firms already announced.

To answer a question put to it in plain English, ROSS then reads through the entire body of law and, within seconds, returns a cited answer and topical readings from legislation, case law and secondary sources.

Speaking via Skype to last week’s Legal Futures Annual Innovation Conference in London, Mr Arruda said ROSS was still in “pilot mode” but was nevertheless “closer to commercial release than I anticipated”, although he declined to put a date on it. He confirmed his ambition to take the technology to the UK and then to lawyers across the world.

Mr Arruda, a Canadian attorney, insisted the technology was designed to assist lawyers and not to interact directly with the public. “Lawyers are best placed to provide answers to their clients. They are trained and… know how to interpret the law”. He added that ROSS “enhances lawyers’ abilities and allows them to do more for their clients at more affordable rates”.

He said Watson’s ability to search through unstructured data was a “great fit” with legal research and that its machine learning capabilities were suitable for any aspect of “the process side of a law firm’s work”.

He had been surprised to find that ROSS, which is currently focused on ’learning’ US bankruptcy law, had been well received not just by smaller firms keen to “level the playing field” by deploying the technology, but also by large firms, in-house, and government lawyers, who are under pressure from clients and funders to reduce their costs.

But much of his time was spent on “managing expectations”, Mr Arruda explained: “There is an over-estimation of what machine learning, artificial intelligence… currently [can deliver]… and an underestimation of where it will be in future.”

He said that using the lessons learned in training ROSS in US bankruptcy law, he hoped to extend its reach to “all practice areas”. In addition to ROSS’s plans for “hopping across the Pond and helping lawyers in the UK” – first reported by Legal Futures in August – he expected to bring it to common law jurisdictions across the world, and then tackle civil codes too.

He predicted Watson and natural language cognitive computing technology would “change what it means to be a lawyer in the future” and would help create “new forms of legal jobs”.

“The good thing is that ROSS, once it learns something, can be replicated so that multiple users can draw on this knowledge, whereas with humans it stays just with one person”, he said.

He added that while ROSS excelled at putting structure into unstructured data, there was also “a lot of structure in law”, which had allowed the technology’s developers “to have a leg up in training ROSS”.

ROSS, which started as an award-winning student project in Canada and moved to the US in June with the backing of a Silicon Valley start-up funder, has investment from a subsidiary of global law firm Dentons.