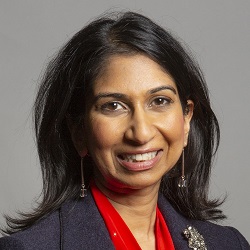 Braverman: No more ‘computer says no’

New guidance on the advice given by government lawyers aims to instil a more “private sector” approach to client service seen in law firms, the Attorney General said yesterday.

Suella Braverman said she wanted to move away from the ‘computer says no’ response that has “hampered” ministers.

Over the weekend, the Daily Telegraph reported that Ms Braverman had banned government lawyers from telling ministers that policies were unlawful. However, it issued a correction yesterday to say that the guidance was instead that lawyers should advise on the percentage of success.

The current guidance note on legal risk for government lawyers, last revised in 2015, already sets out how they should advise in percentage terms and it is not yet clear how it is changed.

Welcoming the correction, Ms Braverman explained on Twitter that she had instigated “the first major review of the quality of government legal advice” and that its conclusions were “overwhelming”.

These were that “government lawyers are too cautious in their advice and this has hampered ministerial policy objectives needlessly”.

There was, she said, “a clear trend of lawyers advising negatively, only to be proven wrong in court” – the government won the majority of cases, the Attorney General observed.

“Moving away from the ‘computer says no’ approach, I put in place new Legal Risk Guidance for government lawyers on how to support ministers better, adopt a solutions-based approach and use innovative legal thinking

“My aim has been to instil a ‘private-sector’ approach to client service similar to what I’ve seen in the top law firms.”

But she stressed that there were thousands of “excellent lawyers working in government” who work “tirelessly to support huge policy change”.

A spokeswoman for the Attorney General’s Office said the updated guidance would be published shortly.

She said it would put “more emphasis than previous versions have on the need for government lawyers to provide solutions-based advice when advising ministers on the risks of their policies”.

The updated guidance “makes clear that the focus should be on how government lawyers can work with ministers to problem-solve issues and advise on how policy can be legally robust in its delivery”.

The spokeswoman continued: “While the guidance does not change the risk assessment underpinning the government’s decision making, it makes it clearer that when, for example, a substantial legal challenge to a policy is likely, it does not automatically mean the policy cannot be pursued.

“It places an emphasis on finding solutions that could be put in place to reduce legal risks and their impact, to help ensure government policy is delivered even when novel or complex, but always within the law.”

The update was developed in collaboration with senior lawyers across government, she added.