Afraid of the competition? SRA ratchets up rhetoric in row with Law Society 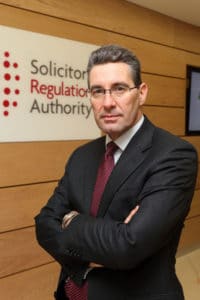 The row between Solicitors Regulation Authority (SRA) and Law Society over the former’s plan to allow solicitors to practise from unregulated firms has stepped up a notch, with the SRA saying “it is hardly surprising that those who are already operating in the legal market are against increasing competition”.

Writing for The Times yesterday, SRA chief executive Paul Philip said: “The SRA’s view is that making it easier for the public to access the services of a regulated solicitor, held to account against the same high ethical standards as any solicitor, is the right way forward.”

He was responding to a Times article last week by Law Society president Joe Egan, which accused the SRA of ignoring the evidence and adopting a policy that “can only undermine the reputation of the profession and put consumers at risk”.

Some would be working in firms, where they would be “regulated and insured, with all advice and correspondence covered by legal professional privilege, which ensures that exchanges with clients are confidential”.

But those working for unregulated business would not have the same insurance or pay into the solicitors’ compensation fund and “wouldn’t inevitably afford their clients privilege protections”.

Mr Egan wrote: “The unregulated outfit could offer a menu of legal services that at first sight might appear to be a bit cheaper than their regulated equivalents, but only at a heavy cost to consumers.

“The unregulated outfit will not be covered by rules governing conflicts of interest, though individual solicitors working there may be. So you could have two solicitors in the same office working on opposite sides of the same case.”

Mr Egan asked whether anyone would deregulate part of the medical profession to test a theory that one branch could cut down on costs and deliver a cheaper service. “Take away protections and your experiment might prove fatal,” he said.

Mr Philip observed that “as one of the UK’s largest exports, legal services are a great international success story. But at home most people simply cannot afford them”.

Pointing to research suggesting that most people and small businesses with legal problems do not use a solicitor, he said “part of the solution has to be to remove unnecessary rules and regulations and increase openness and competition”.

Mr Philip added: “The SRA’s focus is on ensuring high standards, but it also wants to give more people the opportunity to access a fully regulated, professional solicitor. We are in no doubt that this change would allow more people to do just that.”