ABSs “will contribute to the rise of legal services outsourcing”, new book predicts 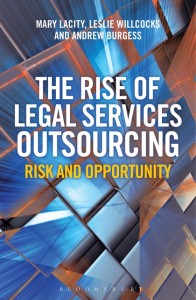 New book: bullish on the future of LSO

Alternative business structures (ABSs) will create additional demand for legal services outsourcing (LSO) and could in time become LSO providers themselves, a new book has predicted.

The book – The Rise of Legal Services Outsourcing – saw this as part of LSO providers moving up the ‘value chain’, with new types of organisations emerging that will blur the “delineated boundaries” between law firms, in-house legal teams and LSO providers.

It was written by Dr Mary Lacity and Dr Leslie Willcocks of the London School of Economics’ outsourcing unit, and Andrew Burgess, a director of outsourcing advisory firm Source.

Their overall message was that in-house legal teams and law firms cannot ignore the fundamental changes to the legal profession caused by globalisation, disruptive technologies and deregulation.

“Clients must at least consider LSO,” they wrote. “We acknowledge that there are presently many obstacles to overcome and new competencies to master.

“But contemporaneous excuses about the profession being an art, that providers from across the world cannot produce quality work, that work cannot be disaggregated, and that the legal profession is not good at project management are the same arguments many chief information officers made about information technology outsourcing (ITO) in the 1980s and many chief financial officers and vice-presidents of human resources made about business process outsourcing (BPO) in the 1990s.”

The authors said that LSO is likely to mature in a similar way, starting with the shape of in-house legal teams changing from a pyramid to a diamond by replacing the “heavy bottom of the pyramid” with LSO providers.

They will also conduct more panel reviews, reduce the number of law firm partners, and increase bundled legal services, while law firms will respond with their own low-cost operations or by partnering with LSO providers.

While outsourcing is initially driven by lower costs available through labour arbitrage, with clients comfortable sending less complex and critical work offshore, the experience from other sectors indicated that LSO will start to be used for more complex and important work, the book said.

There will also be “new engagement models”, culminating in ABS-type arrangements. Noting that the likes of the Co-op and BT have created their own law firms to meet their customers’ legal needs, the authors said: “Building the capacity within a non-legal organisation to provide legal services will create additional demand for outsourced legal services and, conversely, some of these new ABSs could spin out of their parent companies to become LSO providers in their own right.”

The authors concluded that while they were “bullish” about the future of LSO, it will likely have its share of “failures and disappointments”.

Even in the more mature ITO and BPO markets, around 16% of contracts result in failure and 25% see no change in performance. “[In-house legal teams] and law firms will have to master a number of new capabilities to maximise the chances for successful LSO engagements,” they said.