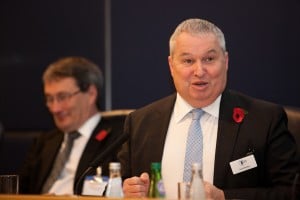 David Redfern, with Paul Stothard in the background

Alternative business structures (ABSs) that are keen to grow by acquisition have failed to make the strides they expected because of the problems of dealing with traditional law firms, it has been claimed.

Tees Law solicitors, which underwent a major corporate restructure before becoming an ABS, has approached more than 50 law firms with a view to acquisition without success, the firm’s senior partner revealed at the Legal Futures 2020 vision conference last week.

Addressing a session called ‘ABS and proud of it’, in which four less high-profile ABSs explained the thinking behind their ventures, David Redfern admitted his firm may have jumped the gun on acquisitions, but was still committed to the idea.

Sharing his address with Tees chief executive, Paul Stothard, who announced an aggressive expansion plan when the firm received its ABS in March, Mr Redfern put the firm’s acquisition strategy’s failure to “move at the pace we thought we would” down to two reasons.

Some of the firms it had approached turned out to be “financial basket cases”, he said. At the other end of the spectrum, some firms were well-established but failed to achieve the required unanimity among partners to adopt change, with some taking the view that contemplating merger was “recession-led and it will all be alright” – when the economy picked up.

Too many partners were of the mind-set that they wanted to micromanage, or “choose the colour of the paint in the reception”.

He concluded: “We feel that we have got to the stage where maybe we stepped ahead more quickly than was possibly going to help with acquisition, but we are still very confident that will be the route we’ll take.”

Christopher Mills, chief operating officer of Schillings, which has evolved from a law firm into a reputation defence business, said there were “a lot of start-up businesses that we have our eye on” for acquisition, due to the “fragmented” market in the reputation market. “We are absolutely not going to bring in any more law firms,” he added, for the same reasons as Tees Law – that they were “either not ready or not financially viable”.

Mr Stothard agreed with Mr Redfern’s view on the unwillingness of many law firm partners to embrace change. He said he had spoken to over 50 managing partners in the last few years who had identified the factors threatening their firms. He continued: “If you nudge them a bit they might acknowledge the need to change… but do they change? In my experience rarely do they.”

Mr Mills explained that Schillings had been a very successful boutique media law firm with “a profit margin to die for” at 49%. But a series of changes affecting its core business meant it opted to become a reputation defence business after much “blue sky thinking”. Challenges to the firm included the growth of social media, which “quite frankly completely changed the rules of defamation and privacy”.

A key problem to be addressed in transforming the firm was with its decision making, he said, because there were partners who “wanted to be involved in all of the detail”.

He said: “If we were to become a limited business and ABS, with non-legal partners, non-legal services… and move to performance-related pay, and get rid of the equity scheme, and introduce an employee share-ownership scheme, there was no way we could deal with it with the way that we dealt with decisions.”

Mr Redfern said the process of transforming Tees had involved resistance among staff. There was “no short cut or easy route. Investing time is the only way through this”, he said.

Mr Stothard said that being a non-lawyer from outside the firm meant he had “no historic baggage”, so his approach, although at times unpopular, was viewed as a neutral “corporate agenda”.