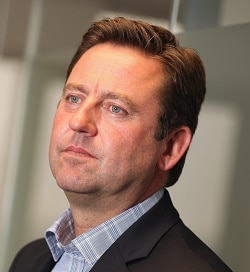 Fast-growing alternative business structure Knights Professional Services is on the look-out for its next acquisition and ‘second city’ location – as well as more non-legal services – after unveiling an increase of more than 60% in turnover over the past year to £33.5m.

Knights was best known for taking investment from high-profile businessman James Caan, but as Legal Futures revealed last autumn, he and his fellow investors exited after four years and were replaced by financing from a major European lender.

The results for the year to 30 April 2017 includes the full-year contribution of Darbys, which Knights acquired in February 2016, adding 100 people, but chief executive David Beech said organic growth made up around a third of £16m revenue growth seen since that deal.

Mr Beech said there were various advantages from being much larger, such as providing more career opportunities for staff and “creating excitement”.

The firm’s name also reflects its recruitment of non-lawyers, such as corporate financiers, town planners and tax accountants, to deliver a broader service.

He said these services both enabled the firm to offer clients advice at an earlier stage than lawyers would be consulted, and also made the relationships with those clients “more sticky”.

Knights’ unique strategy is to target ‘second cities’ where there are now fewer commercial law firms than in the past, as bigger practices have migrated to the major regional cities.

Having started in Newcastle under Lyme in Staffordshire, it now also has offices in Cheltenham, Chester, Colchester, Derby, Oxford and Wilmslow in Cheshire, the latter a new location after staff were moved from the previous office in nearby Hale.

Mr Beech suggested that bigger firms had moved away from these areas because there were not “sexy”. He continued: “[They] left behind pockets of opportunity for medium-sized businesses like ourselves to exploit.”

Further, Knights could offer career opportunities for the professionals who live in these areas and currently commute to the major cities for work.

Mr Beech said he was now searching for an acquisition that would allow the firm to move into a seventh location. He also wanted to continue extending the range of non-legal services, with a focus of building its corporate finance lead advisory capabilities and also project management.

He added: “The last 12 months has been a major step forward in our vision to become the number one regional professional services business in the UK. By moving away from the traditional legal partnership-model to operate as a commercial business has allowed us to grow quickly.”