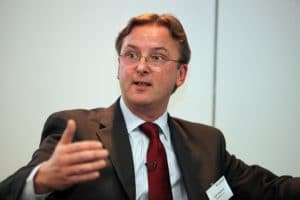 Chapman: law is not immune to march of technology

Riverview Law has become the first law firm to offer its trainee solicitors a six-month seat in technology services, having obtained approval from the Solicitors Regulation Authority (SRA).

Legal futurologists, such as Professor Richard Susskind, have repeatedly called for young lawyers to be trained in technology.

Karl Chapman, chief executive of the alternative business structure, said the SRA had “adopted a flexible approach that enables us to educate future lawyers in how technology can assist them, our customers and the law generally”.

He added: “Technology is impacting every sector of the economy and legal is not immune.”

Thirteen trainees have completed contracts since their scheme was set up in 2014, and 10 more training places will be available next October.

Meanwhile, Co-operative Legal Services (CLS), one of the first three firms to receive an ABS licence from the SRA back in 2012, has 17 trainee solicitors starting contracts this year.

CLS, which last month reported a 9.1% increase in first-half turnover, said it would introduce two intakes of trainees, in March and September, from 2019.

The trainees will work in the probate, trusts, employment and family departments.

In other ABS news, personal injury firm Express Solicitors has reported its “best ever” figures for the year to 31 August 2017, with revenue up 12% to £13.75m.

Unusually, the firm released caseload details, saying they have grown from 8,041 to 8,385 over the year “thanks to continued long term support from Royal Bank of Scotland”.

The firm spent £4.7m on television and radio advertising campaigns during the current year.

On the defendant side of the personal injury world, Keoghs – 22.5% of which is owned by private equity firm LDC – is claiming to be “pre-eminent legal services provider for the UK insurance industry” after announcing this week that it had exchanged contracts on the acquisition of Hill Dickinson’s insurance business group.

A spokesman said 16 Hill Dickinson partners and 400 fee-earners and staff based in Liverpool, London and Manchester would transfer to Keoghs by the end of January 2018. Marine insurance and medical negligence work will remain with Hill Dickinson.

He said the acquisition would bring with it particular strengths in professional and financial risk, corporate risk and defending abuse claims on behalf of religious organisations, private schools, sports clubs, charities, local authorities and others.

John Whittle, chief executive of Keoghs, commented: “In the current climate of consolidation within insurance law, investment in people, technology and infrastructure are the key factors to enable success.

“Keoghs are at the forefront of driving market change and are determined to put clear blue water between us and our competitors.”

Gunnercooke, another ABS, has continued to diversify its business by launching ‘Operating Partners’, a team of over 25 former chief executives and business leaders, who will work with private equity firms to help SMEs improve their performance and expand.

Darryl Cooke, co-founder of gunnercooke, said: “Through Operating Partners, we are striving to deliver the same advances within private equity that we have achieved across the other sectors in which we specialise.”

Christopher Baldock, an Operating Partner and chairman of 6G Internet, said the ambition was to “bring the knowledge and experience necessary to help senior executives implement change with confidence – and ultimately render their businesses more valuable”.

Operating Partners will work alongside both gunnercookeConsulting and the private equity practice in the law firm.

The service is centred the management of employees on international assignments, covering a mix of employment law, immigration advice, international HR, tax and social security planning, and talent management.

On Monday, we reported that a group of internal shareholders at the AIM-listed law firm had sold £10m worth of shares.

Finally, Gabriel Awosika, a former partner at London ABS Blue Trinity, has obtained an ABS licence for his own firm Astute Dynamic, which trades as Astute Legal Solicitors and Advocates in a wider group of diverse businesses.

Mr Awosika told Legal Futures he had only this week received FA approval to become a football agent.

He said Astute Commodities was active in the sugar and petroleum markets, while Astute Consultancy was involved in recruiting staff in the UK for an African law school. Mr Awosika’s work as a football agent is part of Astute Management.

The solicitor said Astute Mediation would handle commercial and family work, while he hoped to open Astute Chambers by the end of the year, though this depended on getting approval from the Bar Standards Board.

Mr Awosika added that an ABS licence had allowed the firm to grow, diversify and “fulfil the ambitions he had been harbouring”.