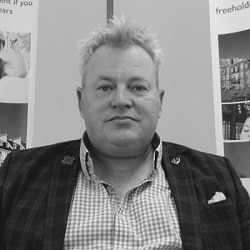 An alternative business structure is preparing to launch a group negligence action against conveyancers working for the developers and purchasers of ‘help to buy’ leasehold housing.

Mr Burns said the group action would be based on the failure of conveyancing solicitors to warn buyers of “very onerous ground rent terms” in the leases to their new homes.

He gave as an example a ground rent of £290 on the lease for a house worth around £100,000, which would double every decade for the remaining term of the 999-year lease.

He said another example was a charge of £300 per room for replacing the carpets, or £120 for a license to put up a new kitchen blind.

Mr Burns said “useless clauses” were inserted into leases, simply to build the freeholds up as an asset class which could be sold off.

He said that 57 of the first 80 cases involved the same freeholder, which had bought the freeholds from a developer. He said a further 600 clients were waiting for their conveyancing files to be sent to them by their solicitors.

Leasehold Law is part of a group of three companies. Mr Burns co-owns both Leasehold Law and Leasehold Valuers, a firm of chartered surveyors, with two other individuals.

He is also managing director of Leasehold Solutions, a specialist project management company which he does not own. All three companies are based in Croydon.

Mr Burns said Leasehold Law became an ABS in 2015, and currently employed three solicitors, with a fourth being recruited.

He said the buyers involved in the negligence actions were sold help to buy packages, where they were offered thousands of pounds of cashback if they completed within 28 days and used the solicitors recommended by the developer.

“Some of the leaseholders are being quoted prices of £40,000 to buy the freehold of their houses because of the ground rent. Their houses are often worth only around £100,000.”

Mr Burns said the property buyers came from across the country, with particular “hot spots” in the North West, and in the cities of Manchester, Liverpool and Newcastle.

Away from the negligence actions, Mr Burns claimed Leasehold Law was working on more leasehold and freehold extensions than other law firm – around 5,000 of them, mainly within the M25.