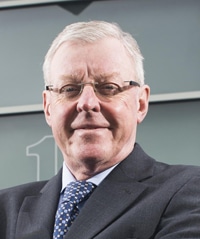 Rand: did not comply with SRA requests for information

The former boss of the first accident management company to buy a law firm and become an alternative business structure (ABS) has been rebuked and fined £7,500 by the Solicitors Regulation Authority (SRA) for 11 accounts rule breaches and two breaches of the SRA principles.

Though the SRA only has the power to fine law firms and those working in them up to £2,000, with ABSs it can fine firms up to £250m and individuals £50m.

Tony Rand was managing director of Vamco, which in February 2013 bought Kingsley Law, which was previously part of the Nesbit Law Group.

Mr Rand, a non-lawyer, became head of finance and administration (HOFA) at the ABS, based in Farnham, Surrey.

According to the SRA’s register of ABSs, Kingsley Law ceased to practise in July 2015. Companies House records that both the firm and Vamco were put into creditors’ voluntary liquidation on 31 July 2015.

The SRA said, in a decision notice on its website yesterday, that one of its forensic investigation officers (FIOs) met Mr Rand on 4 August 2015 and asked him to provide “extensive information and documentation” to show that, in his role as HOFA, he had complied with the accounts rules.

“Despite further correspondence and Mr Rand purporting to respond to the FIO, no, or no adequate, answers have been given and no relevant documentation provided.”

The SRA said the investigating officer’s findings, which Mr Rand “failed to counter”, included failing to keep proper accounting records of dealings with client money, failing to keep client ledgers or a client cash account and failing to use a double-entry book-keeping system. Instead the firm “recorded payments and receipts on a spreadsheet”.

The SRA said that when its FIO attended the firm, financial records were not made available.

“Despite several requests made by the FIO and the supervisor, Mr Rand has not provided copies of the ledger accounts.

“Mr Rand could not confirm to the FIO how much money Kingsley was liable to account for to each client as at the date of the liquidation. The FIO could not establish the position himself because Mr Rand did not provide him with a list of client matter balances, client ledgers or a client cash book.”

The SRA said there was no system to ensure that proper client account reconciliations were carried out at Kingsley Law.

Mr Rand was found to have breached 11 accounts rules, and SRA principles 7 and 10, by failing to comply with legal and regulatory obligations and failing to protect client money and assets.

He was also found to have failed, as a HOFA, to report material breaches of the accounts rules to the SRA.