ABS owner given $500m to invest by private equity giant 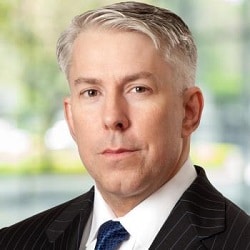 CVC Capital Partners – one-time owner of Formula 1 – is set to make $500m available for investment in the business.

City-based law firm Marshall Denning, which launched as an ABS in the spring of 2017, employs 275 lawyers and has 13 offices around the world.

UnitedLex chief executive Dan Reed praised the Solicitors Regulation Authority – and especially director Crispin Passmore – as the “most progressive regulatory body in the world and why we see the UK as an important base” for international expansion.

UnitedLex is not a regulated law firm – even though around 75% of its 2,700 staff across four continents are lawyers – and does not fit labels such as outsourcer or managed legal services provider.

Rather, it appears to be a unique business in the legal market that offers consultancy, technology solutions and actual delivery of legal services to companies and now law firms too. It is predicated on building huge scale.

It goes into companies and reviews what Mr Reed described as their “legal ecosystem” – all areas of the business affected by legal issues – and offers a blueprint on how they can optimise performance, risk and cost.

This can then be implemented, if the company wants, by the wide range of services that UnitedLex offers. It targets more everyday legal work, leaving merger and acquisition activity to the big City and Wall Street firms.

Marshall Denning is used where an independent law firm is required for regulatory reasons.

Mr Reed, a US lawyer, is one of Marshall Denning’s directors and he told Legal Futures that the firm was structured so that it could operate in countries where law firms not owned by lawyers and unregulated legal businesses were not allowed.

The firm is named after leading figures in US and UK jurisprudence – John Marshall, the longest-serving chief justice of the US Supreme Court, its first black justice, Thurgood Marshall, and Lord Denning.

Mr Reed added that its biggest corporate clients paid UnitedLex $70-100m a year. The company says it has won contracts worth more than $1.5bn over the last 18 months and now acts for more than a quarter of the Global Fortune 500.

They include DXC Technology, a $26bn US company that chose UnitedLex to lead the global transformation of its legal department, and US giant General Electric, which is using the firm to “optimise legal functions supporting litigation and investigations”.

Mr Reed said UnitedLex allowed companies “to procure legal services in a way they haven’t been able to before”.

In June, it launched ULX Partners, an offering for law firms. More than 300 lawyers and other staff were “rebadged” from US firm LeClairRyan – the first to sign up – to join over 130 UnitedLex employees to comprise the initial staffing of ULX Partners.

They provide “a full range of legal support (litigation, corporate, intellectual property, and other), finance, human resources, IT, pricing, procurement, and knowledge management”.

Mr Reed said he was talking to UK firms interested in it too. Law firms’ partners receive equity in and a profit share from ULX.

Unusually, the UnitedLex senior management has bought shares in the company at the same time as the CVC investment, rather than sold, as a sign of their commitment, Mr Reed said.

“CVC has the geographic reach, sector expertise, scale, and significant capital that will undoubtedly help us expand our technology development and provide clients with unique financial structuring as part of our industry-changing solutions,” he added.

He said that while other functions in companies had been transformed by modern ways of operating, legal departments had until recently been exempt: “Law has lost its immunity from scrutiny by C-suites and boards of directors.”

Siddharth Patel, senior managing director at CVC, said: “UnitedLex has a multi-billion-dollar opportunity ahead of it, with legal services being one the few remaining verticals that is early in the penetration curve of technology, consulting, and solution delivery.

“UnitedLex continues to innovate with game-changing engagements with the world’s leading companies.

“Now is the perfect time for us to provide significant capital to enhance its growth and scale, the beginnings of which we’ve already seen in its impressive financial performance, customer wins, and pipeline of opportunities.”