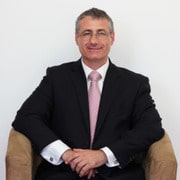 Not many provincial solicitors’ firms have a corporate helicopter available for use by favoured clients to entertain their own customers, piloted by the multi-millionaire owner.

Or a barristers’ chambers, or a legal loans company, or a military department aimed at delivering legal services to current and retired servicemen and women. Or a gym for staff and clients, or a 20-room hotel to provide accommodation for, among others, participants in its mediation business.

This is the world created by solicitor and businessman Michael Horne, owner of the Hereford-based Kidwells group of businesses, who came to the law in his 30s after building a successful international trucking company, among other ventures.

Kidwells Law Solicitors has just been granted an alternative business structure licence (ABS) by the Solicitors Regulation Authority. The application was made in order to secure the freedom to appoint non-lawyer directors.

Any mention of trucking and barristers naturally brings Stobart Barristers to mind. There are some parallels but unlike in the case of Stobarts, the Kidwells barrister connection did not emerge from a desire to cut out solicitors, although direct access features in both business models. Mr Horne first built up a legal capacity to serve his business interests, then turned it into a law firm with himself at its head.

He explained: “We were struggling to find lawyers that understood the kind of business that we were delivering so we spent an awful lot of money with solicitors going across the country. In the end, I set up a legal department… When we were dealing with planning committees or if any of the lorries would get in trouble, I would represent my company in court and we were really getting good results.”

After switching to a career in the law at the age of 33 and qualifying as a solicitor, he founded Kidwells in 2008 as a sole practitioner. The firm was initially based in a leased office but Mr Horne is proud of the fact it is now housed in a purpose-built building. Kidwells House, located in a Hereford industrial estate, was built “from profits and none of it is financed”.

The firm is now incorporated, with Mr Horne its managing director and sole shareholder, four solicitor directors, a barrister director, two non-qualified directors, and has various other fee-earners, including trainee solicitors, among the 23 staff. “We have got people now instructing us on a retainer that are in multi-billion pound companies, as well as looking after the small guy locally.”

He is keen to emphasise that he is a businessman first and a lawyer second and that the group’s businesses put client care before everything else. The firm’s Lexcel accreditation is at the heart of its approach, he said.

There is no doubting his ambition as a businessman and Kidwells’ expansion into niche areas of legal services shows an entrepreneur’s touch. For instance, the firm has a military department, headed by a solicitor who spent 17 years in the forces. Fittingly, given that Hereford is home to the SAS, the department’s promotion among the serving and retired military community is carried out by a retired senior special forces officer.

In July 2013, Mr Horne launched the chambers, Kidwells Barristers Ltd, which currently has 10 barrister door tenants, and shares the office facilities of the solicitors’ firm. The head of chambers is Dele Alakija, a part-time immigration judge. The chambers, which says it is the only one in Herefordshire, has applied for permission to run pupillages and all the barristers are trained to offer direct access services to the public.

Unless there is a regulatory objection, any pupil barrister at the chambers will first have to spend 12 months working at Kidwells Solicitors, he insisted, in order to instil “a good understanding of client care and how it is delivered”.

Another innovation introduced by Mr Horne, although still at an early stage, is a for-profit legal loans company, which he said was designed to ensure that people who do not qualify for legal aid have the means to pay for legal advice. Not everyone will qualify for a loan, he said. “We won’t take just anybody; we will take only those people we think genuinely need the assistance of lawyers at our level.”

The group has a ‘creative innovation department’ to support the various businesses. It employs four people – two editors and two producers – to build websites, produce podcasts, videos and so forth.

Mr Horne has ambitious plans for his mediation company, Kidwells Mediation Limited, which puts up people who come for mediation at another Kidwells-branded enterprise, the 20-room guest house in nearby Hereford, which is alcohol-free, open to the public, and “the biggest privately-owned guest house in Hereford – and it’s four star”. The mediation business will run 24/7, he said: “There’s going to be no 7:30pm ‘sorry, the lights are going off you’ve got to go home’”.

The ‘open late’ theme is continued in plans for a 600 sq m gymnasium, which is being built next to Kidwells House and is nearing completion. “We’ve got saunas, treatment rooms, we’ve employed 10 personal trainers to work in this gym from six in the morning to 10 at night, seven days a week. It will turn a profit but really it’s a marketing tool,” said Mr Horne. Clients will be able to train in the gym, as will staff, who “will be given time in their working day to do it”.

Appropriately, given that its head is a qualified pilot, Kidwells has its own Jet Ranger helicopter. According to his website biography, Mr Horne is also an expert in “fixed wing aerobatics” and, somewhat disturbingly, a “fully-trained freefall parachutist”. The helicopter is used “for going and seeing clients at local airfields close to where they are, which saves us travelling and saves them travelling, and we use it also for marketing, and our clients get to take their clients off to lunch in it”.

Mr Horne is uncertain whether Kidwells’ ABS status will be used beyond a vehicle to allow non-lawyers to become directors of the firm. His current plans are to keep the various strands of the business separate, but he held open the possibility that when eventually a management company is put in overall control of the group, it may be located within the ABS.

He is adamant that a business background and his particular route to qualification is the secret of the firm’s success to date: “I am not a thoroughbred lawyer – I didn’t do school, college, university, training contract, legal practice. I come from business and therefore I understand that really what the client wants is the delivery of the service; they want an answer, the answer that’s right for them, and in order to do that you have to understand business.”