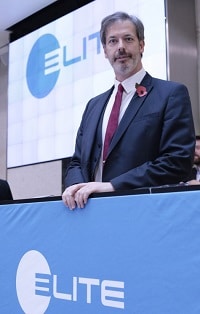 Gary Gallen, chief executive of rradar, told Legal Futures that listing was “certainly something we’re looking at”, and being part of the programme would give the firm “all the tools and skills you need to do that effectively”.

He said the advantages of listing included access to capital, allowing the firm to expand and properly deliver the potential of the business model, and to “recruit some of the finest people at the right level” to develop ideas in other markets.

Rradar began as an employment, taxation, health and safety and environmental law service, based in Hull, becoming an ABS in 2014.

Mr Gallen said its rapid growth, which has seen it grow from a single employee to 100 staff in a new purpose-built office in four years, was currently driven by clients across the UK.

“The main reason for listing is, of course, to ensure we deliver the right service to our customers. We have ambitions to go beyond the UK.”

A potential disadvantage of listing could be damaging the firm’s culture, and the “spirit and energy” it showed, particularly in research and design.

Mr Gallen said acquisitions had been considered, but, rather than buying another law firm, rradar was more likely to buy a technology firm with radio, broadcast and journalistic ability, or with skills in virtual reality.

“I don’t think law firms should just be hiring lawyers. We take a multi-disciplinary approach with collaboration across  many business advisory areas, so that as well as lawyers we also employ many qualified specialists, advisors, teachers, multi-media artists and AI developers.

They’re as crucial to the future of business law as the lawyers themselves, as they reflect the many advisory and communication needs of a modern business.”

The firm was introduced to the ELITE scheme via a government department. Mr Gallen said it was selected because of its “genuinely disruptive and innovative approach” to two “huge industries” – insurance and the law.

He said rradar’s rapid growth, with turnover hitting £4m last year and exceeding this already in 2017, was also part of the reason why it had been chosen as the first law firm to enter the programme.

Along with listing, Mr Gallen said the firm was considering a share incentive scheme for staff. He said there were no external owners, and although the firm was launched with private equity finance, it was no longer needed.

Mr Gallen said the firm had been set up, as a consultancy, to help start-ups and SMEs, but now also helped corporations worth £1bn.

“They don’t need much help with HR or health and safety, but they still need specialist regulatory and compliance advice.”

Mr Gallen said around 30 of the firm’s staff were design and technology people, and the firm had a design partnership with IBM’s Watson. One result of this partnership is ‘Grace’, a machine learning-driven app, launched with Axa Insurance in March, which uses a virtual assistant to deliver legal and risk management advice.

There is also rradarstation, which offers a wide range of guidance and templates which companies can download, supported by a 24-hour telephone advice line.

He said being part of the ELITE programme would give rradar access, during the initial period of 18 months, to some of the most “intense and sophisticated” training available.

“We’re trying to be the thought leader and drive the market.”