“A scandal within a scandal”: Call to investigate Post Office lawyers 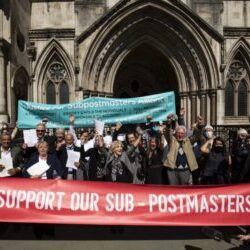 Sub-postmasters: Questions need to be asked about lawyers

Researchers have called for an investigation into whether lawyers involved in the Post Office Horizon litigation committed professional misconduct, calling it a “scandal within a scandal”.

A project led by Professor Richard Moorhead expressed “wide and deep concerns” about the conduct of the Bates litigation by Post Office Ltd (POL), IT provider Fujitsu and their lawyers.

“At the very least, the concerns emphasise the need to take the handling of litigation strategy, evidence gathering, disclosure, and evidence preparation with greater care than appears to be the case here.

“Whether the breaches of CPR suggested by Fraser J’s judgment were accidental, negligent, reckless or deliberate and who is responsible for such flaws needs investigation.”

The Post Office scandal led to the wrongful convictions of dozens of sub-postmasters as a result of the operation of the faulty Horizon IT system, but the paper focuses on the civil claim brought by 584 sub-postmasters against POL, known as the Bates litigation after the lead claimant.

It was heard by Mr Justice Fraser, who said: “The Post Office has appeared determined to make this litigation, and therefore resolution of this intractable dispute, as difficult and as expensive as it can.”

They said the scandal showed the deployment of law and legal work in a number of ways, from drawing up contracts and enforcing debts under them to the prosecution of alleged wrongs and the presentation of corporate governance and decision making in parliamentary and other contexts.

“This suggests an enormous power has been wielded through law, without proper accountability, and with professional regulation providing apparently insufficient protection against failures.

“Responsibility for legal risk and decision-making is a critical challenge for corporate governance and professional regulation. And there is a risk of privilege has been abused: concealing factual information and shielding egregious decisions from scrutiny.

The working paper said the judicial criticisms made “go further than obstruction to suggest the possibility of deliberate disruption”.

The list of CPR failings relating to pleadings, disclosure, witness statements and submissions was “both wide and deep”.

The academics explained: “Excessive cost is driven by taking points Fraser J found were of weak or no substance. This was done on substance, procedure and evidence.

“The implication appears to be that pleadings, disclosure, witness statements and submissions were handled in ways either below expected standards or with an eye on disruption or non-cooperation.

“It follows that the conduct of both internal and external lawyers merits further, thorough investigation.”

The paper suggested that cross-examinations may have breached professional guidelines by not having the evidence to back them up.

It recognised that the substance of many problems may have lain in the attitude and approach of POL and Fujitsu personnel, but in any case there was “a real question to be considered as to how practitioners, owing obligations to the court and the administration of justice, and duty bound to protect their own independence, should have responded when dealing with a case riven with difficulty but run on such an aggressive basis”.

Another key question arising from Fraser J’s comments, the researchers said, was whether POL’s lawyers put their duty to their clients ahead of their duty to the administration of justice and the rule of law and their obligations as officers of the court.

The paper added: “What is meant by strategy and what is properly and legitimately thought of as instructions is a matter not well developed in the law of professional conduct.

“Without definition there is a danger of an accountability gap: lawyers justify problematic litigation strategy and tactics on the basis of the client’s instructions; and clients justify their actions based on legal advice.”

Professor Moorhead said: “The conduct of the Bates litigation is a scandal within a scandal. Mr Justice Fraser’s judgments suggest lawyers making inappropriate arguments, evidence which was mismanaged or misrepresented, and the use of aggressive tactics which were contrary to civil justice rules with the apparent intention of exhausting the resilience and resources of the claimants.

“We hope our analysis contributes to the ongoing investigation of these matters. The Sir Wyn Williams Inquiry needs to investigate and the professional regulators need to act to enforce the obligations that lawyers and their powerful clients owe to the administration of justice.”

Professor Moorhead said the case may also be symptomatic of more general concerns about “powerful clients undermining the independence of their lawyers and poor conduct in civil litigation”.

The research is part of a broader project looking at issues in corporate governance, criminal justice and professional regulation, as well as government oversight, in the context of the Post Office scandal.