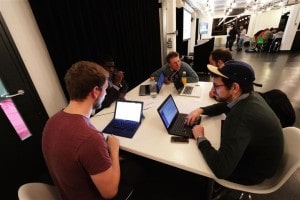 A team of computer coding specialists from magic circle firm Freshfields Bruckhaus Deringer have won a groundbreaking ‘hackathon’ to create an IT-based product of use to Hackney Law Centre, with a multi-lingual access to justice website built from scratch in just 24 hours.

The ‘coding for good’ hackathon, organised by lawtech community website Legal Geek, was attended by more than 150 coders from around the world, including those who flew in from the US, Romania and Gibraltar.

The task facing the assembled technologists was in the space of a weekend to “conceive, build, and pitch technical solutions that solve the current issues that affect the delivery and access to legal services in the borough and beyond”.

Legal Geek founder Jimmy Vestbirk said the main problem the event addressed was that half of the law centre’s clients drop out after one meeting, “for a variety of cultural, social and language reasons. We thought that more developers and coders need to be involved in lawtech disruption to combat this problem, and the hackathon is a creative and effective way to do this”.

The Freshfields team devised an interactive website in seven languages that when up and running could help provide a solution to legal problems in housing, welfare and benefits, immigration, and employment. Visitors can contact the centre after ‘opening a case’ online from a menu relating to their specific problem.

Mr Vestbirk told Legal Futures that the Freshfields team’s winning entry was among three that “really stood out”. He expected the website to be developed further and he planned to discuss its future with the law centre later this week.

Another successful pitch was an artificial intelligence-based (AI) “SMS virtual assistant” which via an algorithm used an existing online translation engine to translate urgent mobile texts about legal problems into English from the user’s own language, and texted back in that foreign language giving the user instructions about how to proceed.

The app was a “virtual receptionist” that was “really amazing”, he said. “It might have won, but the demo was not quite as slick as Freshfields’ – it didn’t quite work, but it’s a lot to ask in 24 hours.”

The third outstanding offering was “a bit more of a simple one, to do with text reminders”. The reason the law centre liked it so much was “that they could start using it right away, it really solved a core problem for them. So although it wasn’t necessarily the most technically advanced, it ticked a lot of boxes in the judging criteria”.

The judges included a representative of Hackney Law Centre and tech industry leaders. About a third of participants were individuals who were paired into teams on the night. A total of 10 people pitched solutions.

The top prize was “£1,000 worth of startup legal advice” from startup specialist law firm, General Standards. Access to justice crowdfunder, Crowd Justice, and Amazon provided £300 worth of Amazon vouchers.

He praised the collaborative approach taken by the participants, who talked to each other as they progressed. In a commercial hackathon, he said, the coders were highly competitive, secretive, and focused on winning cash prizes. “Everybody was really trying to solve problems for the law centre… which is a really hard culture to create in such a short space of time when two thirds of people had not met before.”

A member of the winning team, Milos Kresojevic, an enterprise architect at Freshfields, said: “Technology has huge potential to improve access to justice for people everywhere. This hackathon has shown what can be done in a very short time.”

Miranda Grell, Hackney Law Centre’s development officer, said: “As a small community charity with meagre resources, finding new ways to increase our efficiency is of paramount importance to us.”