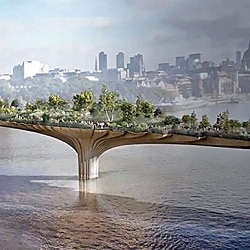 Lawyers were paid £3.5m on the project to build a garden bridge across the River Thames in London, which was abandoned before it was built, a full breakdown of spend has shown.

Legal fees were a small proportion of the £53.5m in total that was spent on the controversial project – started by then London Mayor Boris Johnson – of which £43m was public money, with the rest coming from private donations and fundraising activities.

As financial administrator for the public sector funding, Transport for London (TfL), which provided the money along with the Department for Transport, yesterday published a raft of unredacted documents relating to project and the activities the Garden Bridge Trust.

The full line-by-line breakdown of all expenditure on the project showed that London firm Bircham Dyson Bell (now BDB Pitmans) was the main recipient of legal fees.

It pocketed £2.7m for its work advising first TfL and then the trust, which in November 2015 became fully responsible for the construction and management of the project. The project collapsed in August 2017.

International firm Gowling WLG was a major player too, receiving £507,287 for advice to TfL on property, consents and asset protection arising from the trust’s proposals, and a further £21,444 on unspecified legal advice.

Three other law firms – Eversheds, Watson Farley & Williams, and Hogan Lovells – all received much smaller sums for pieces of advice, while three QCs and three juniors featured on the list, with John McGhee QC of Maitland Chambers receiving the most at £11,520.

BDB, Pinsent Masons and Macfarlanes will share another £10,000 in fees for work still required to close the trust and project.

A review on the trust’s request for funds to underwrite the final costs confirmed that the final amount payable to is £5.5m, which will come from central government. “It is around 40% lower than it could have been,” TfL said in a statement.

It added: “As part of the review of the assessment, TfL also sought independent legal advice from a leading QC, following concerns raised about whether the trustees of the Garden Bridge Trust may have breached their legal duties.

“This legal advice found that there is no reasonable prospect of TfL (or DfT) being legally able to either withhold future payments, or recover past payments.”

Alex Williams, director of city planning at TfL, said: “We worked to ensure that the cost to the public sector has been kept to a minimum, and having carefully reviewed the Garden Bridge Trust’s request, we have now confirmed the final payment legally required under the terms of the underwriting agreement made by the government.

“This formally ends our involvement with the project.”