Kesic: This is what clients want nowadays

An app linking consumers to lawyers who provide free video consultations has been launched this week after three months of testing with 20 law firms.

Rudi Kesic, chief executive of Advantage Consulting, said over 160 law firms have so far signed up to Lawyer 365 and 10-15 lawyers were being onboarded every day.

Although the app is up and running, a national media and marketing campaign will not be launched until the end of June after more law firms have joined.

Lawyer 365 covers the full range of consumer and business legal services, including personal injury and criminal law as well as intellectual property and business law. It also provides a host of legal documents.

It is free for consumers, who can use the app on mobiles or laptops, and offers them a choice between a search based on type of legal advice or location.

They can then book free video consultations in blocks of 15 minutes – users can have 30 minutes of free advice but the experience to date is that 15 minutes is usually enough.

Consumers can leave testimonials and ratings, while the system will give firms a rating out of five on speed of response.

Lawyer 365 is funded through the law firms and solicitors who upload profiles to its database. Lawyers can get a free subscription that just includes their basic details, or they can pay to be able to accept and respond to enquiries and track analytics such as seeing how often they appear in searches.

Firms can also pay extra to appear more prominently in results for certain locations. The service is free for a trial period until the end of June.

Lawyer 365 does not regulate the fees firms go on to charge clients who want to instruct them, except requiring that they be very clear and transparent.

Mr Kesic said the concept behind the service originated as long ago as 2015 when he was managing partner of Midlands-based Advantage Law, which he sold in 2018. 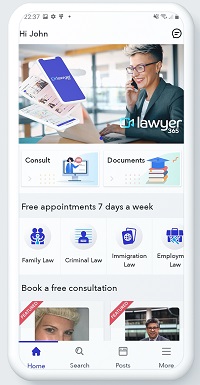 Mr Kesic said that the market in 2015 “was not right for something like this” but he started investing heavily in 2018 and now has a team of 10 working on Lawyer 365 from an office in Solihull.

He said a combination of lawyers, business experts and software engineers was needed to develop the app.

When the pandemic hit last year, although it changed the behaviour of consumers and lawyers in a way that meant the timing “was right”, the practical problems of getting teams together physically delayed the launch by six months.

“It’s all about the client and enabling them to search and engage with quality lawyers easily,” Mr Kesic said.

“People can speak to lawyers through video consultations, text, chat – whatever they want.”

Mr Kesic said many of Advantage Consulting’s over 500 law firm clients were aware of the concept and there had been a “huge response” from them in terms of interest.

He said his approach was “very cautious”, but the launch earlier this week went well and there were “no technical issues at all” because the app had been tested.

“This is what people want, what clients want nowadays. They want to connect with lawyers with their smart phones. We have to engage with that change.

“It’s not a question of filling gaps in the market, it’s a question of being transformational – in the same way that Blockbusters was replaced by Netflix.”

Mr Kesic said Lawyer 365 aimed to launch a legal assistant using artificial intelligence in July. The aim was to provide consumers with information when lawyers were not available or consumers could not find the right lawyer.

“The assistant will carry out an assessment of their legal needs by asking questions in a human, lawyer-like manner. It will then arrange for a lawyer to call them back.”

Mr Kesic added: “Lawyer 365 isn’t just a technology platform. It’s a new business concept, underpinned by technology and AI, which genuinely has the potential to disrupt the market.

“We’re not building this for today, we’re building it for the next five to 10 years. Change will come, whether we like it or not. We’re living in a different world now.”