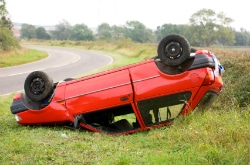 Damages for whiplash injuries will be limited to fixed amounts

Compensation claims, particularly for minor injuries as a result of road traffic accidents, are the centre of ongoing tension between the insurance industry and those who represent claimants.

The Civil Liability Bill aims to put an end to what the government sees as the high number of “minor, exaggerated and fraudulent claims for compensation resulting from whiplash injuries sustained in road traffic accidents”.

Regardless of where you are in the debate, the Bill is certainly going to shake up the insurance and legal industries, with one side arguing it will reduce insurance premiums for motorists, and the other concerned about people injured due to the fault of others losing access to justice.

Introduction to the Civil Liability Bill

The most radical change in the Civil Liability Bill  is probably the introduction of a tariff scheme, giving the Lord Chancellor the power to limit damages for whiplash injuries to fixed amounts.

The tariff would apply where injuries lasted for no more than two years, and departures from it would be allowed in exceptional circumstances.

The second key element of the bill is to set up a new system for calculation of the personal injury discount rate. This only applies in cases of catastrophic injury, where damages are awarded to cover many years of loss. It is intended to reflect the likely rate of return on investment of compensation awards so that the claimant is not ‘over-compensated’.

The Lord Chancellor’s decision on where to set the rate will be based on advice from an expert panel, using a ‘low-risk’ investment profile “intended to provide not less or more than 100 per cent compensation for the injury sustained”. There would regular  reviews of the rate – at least every three years. At the moment, the investment profile used is virtually ‘no risk’.

A further element of the Civil Liability Bill is a ban on pre-medical (or ‘pre-med’) offers, where insurance companies settle claims directly with accident victims, without obtaining medical evidence.

Not included in the bill, as it does not require primary legislation, but a central part of the government’s whiplash reforms, is a rise in the small claims limits for personal injury cases.

The Civil Liability Bill and the rise in the small claims limit are expected to be implemented at the same time in April 2019.

Summary of the proposed changes:

Why was the Civil Liability Bill introduced?

The Civil Liability Bill is a response to the longstanding belief held by Conservative governments, sections of the media and the insurance industry that a US-style ‘compensation culture’ has taken root in this country.

The Legal Aid, Sentencing and Punishment of Offenders Act (LASPO) Act 2012, implemented in 2013, limited the success fee lawyers could charge in conditional fee agreements to 25% of damages and introduced fixed costs for personal injury fast-track cases. Both measures featured in the Jackson reforms.

As with LASPO, the government hopes the Civil Liability Bill will enable insurers to pass on savings from the reduced cost of dealing with personal injury claims to consumers in the form of lower motor insurance premiums.

The personal injury discount rate was cut from 2.5% to -0.75% by the former Lord Chancellor, Liz Truss, in February 2017. Welcomed by claimant lawyers, the move has increased compensation awards, particularly for the most serious personal injury cases.

Lord Keen, the government’s justice spokesman in the House of Lords, told peers in May that damages awards were currently averaging 120% or 125% of the true value of injuries, putting “huge pressure” on the NHS, which spent £1.7bn on compensation claims last year.

The government is hoping to review the discount rate as soon as possible after the Civil Liability Act comes into force, with the aim of increasing the rate and reducing compensation awards.

Which claims are affected by the Civil Liability Bill?

Section 1(1) of the Civil Liability Bill defines a ‘whiplash injury’ as “an injury, or set of injuries, of soft tissue in the neck, back or shoulder that is of a description specified in regulations made by the Lord Chancellor”. A fuller definition will be provided in the regulations, a draft of which has been published to help inform peers and MPs as they debate the Bill.

Whiplash injuries are notoriously difficult to define and the new definition is likely to the subject of satellite litigation.

The bill covers both RTA-related whiplash claims and ‘minor psychological claims’. These are expected to include shock, but exclude post-traumatic stress disorder or depression. Including psychological claims in the bill is seen as a way of avoiding exaggerated claims being brought outside it.

The bill makes clear that it does not apply to injuries suffered by motorcyclists, cyclists and pedestrians. However, planned increases in the small claims limit for personal injury cases will include these groups, as well as public and employer’s liability cases.

The tariff scheme is set out in a draft order of the Civil Liability Bill, laid before Parliament in May.

Total damages for pain, suffering and loss of amenity payable for whiplash injuries lasting less than three months is restricted to £235  when currently it is £1,800.

That figure rises to £470 for injuries up to six months, and to £805 where the injuries last nine months.

The maximum fixed tariff for a whiplash injury, applying where victims have suffered for up to 24 months, is £3,910.

The draft order states that a 20% uplift in damages may be awarded if the court is satisfied that there is a higher degree of pain, suffering or loss of amenity, or if the circumstances giving rise to the injury are exceptional.

The tariff system will be set out in full in the regulations by the Lord Chancellor. Claimant and defendant lawyers expect it to lead to significantly reduced compensation awards.

What will happen to pre-med offers?

Claimant lawyers have campaigned for some time for a ban on pre-medical offers. Accident victims are regularly warned by claimant lawyers that accepting pre-med offers is risky and could result in lower compensation payments.

A ‘regulated’ person breaches this part of the Civil Liability Bill when they know or have reason to suspect a whiplash claim is being made, and without sight of the appropriate evidence, carry out one of the prohibited activities.

The bill lists the bodies supervising regulated persons, such as the Law Society, the Bar Council and the Claims Management Regulator. Insurance company claims handlers, claims management company representatives, solicitors and barristers will all be regulated persons.

Regulators are given the job of policing the ban, just as they have been doing with the ban on personal injury referral fees introduced by LASPO.

How does the Bill relate to small claims reforms?

This change can be made by secondary legislation and will be timed to coincide with introduction of the Civil Liability Bill, scheduled for April 2019. The vast majority of whiplash claims are likely to fall within the new £5,000 limit.

In a report published in May, the justice select committee strongly criticised both the increase to £5,000 for RTA cases and the increase to £2,000 for public and employers’ liability cases.

What does the Civil Liability Bill mean for consumers?

The combination of the Civil Liability Bill and the rise in the small claims limit will make bringing a whiplash claim much less attractive for consumers. The damages awards achievable under the tariff scheme are very modest.

In the great majority of cases, consumers will have to follow the small claims procedure. This allows them to pay for a lawyer if they want one, but they will have to pay the fees from their limited damages. The government thinks people can handle such cases themselves.According to  shed alongside the bill, the government has calculated that the whiplash reforms will reduce motorists’ insurance premiums by £1.1 bn, or an average of around £35 a year per policy.

However, the Law Society, the Association of Personal Injury Lawyers and Motor Accidents Solicitors Society have argued that the Bill will unreasonably restrict access to justice and questioned whether any savings generated by the proposals will be passed onto customers by the insurance industry.

What does the Civil Liability Bill mean for insurers?

The bill is good news for insurers and contains many of the changes they have been lobbying for in the last few years. The government has said it expects insurers to pass on the bulk of the savings, estimated at around £1.2bn , onto motorists in the form of lower motor insurance premiums.

The Association of British Insurers (ABI) and the Forum of Insurance Lawyers are strong supporters of the Bill and believe it is long overdue. Huw Evans, president of the ABI, described the Bill earlier this year as “great news for consumers”.

Mr Evans said soft-tissue injury claims were one of the “root causes” of the high cost of motor insurance, and the benefits of the whiplash reforms would be passed on to consumers – just as happened after LASPO, when premiums fell by £50 over the next two years.

The ABI co-ordinated a letter in which 26 major insurers committed to passing on savings, and the government has said it will monitor whether they actually do – although how the promise can actually be enforced is not clear.

What are the next steps?

After its second reading in the House of Lords, the Civil Liability Bill entered its committee stage in the Lords in May. The report stage, at which opposition peers are likely to try and amend, is on 12 June.

The government intends to implement the bill in April 2019, and for the rise in the small claims limit to be introduced at the same time. The first review of the discount rate (which under the bill could be carried out within 90 days) could come as early as July 2019. Lord Keen told the House of Lords that the government wanted to carry out the first review “as swiftly as possible”.