Why can't we be friends? 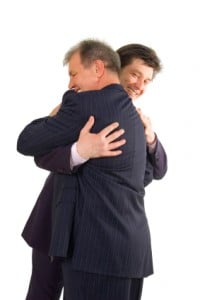 Mutual benefits: firms shoudl be bold enough to overcome their natural fear of the competition

What would happen if a number of firms in a county decided that the best way to face the future was to specialise in a specific area of work? If they each agreed which practice areas they would cover with each other and agreed to work reciprocally? If they cross-referred to each other with the aim of dominating their local area?

Knowing the responses I’ve had on that topic, I think it’s unlikely to be something we will see a lot of, but if firms were bold enough to overcome their natural fear of the competition, they could leap ahead.

In part it’s down to the nature of the profession. It’s like being back at school with your arm around your work; the idea that it’s important to avoid letting anyone else benefit from what you’re doing.

Unless it’s a merger (for which read ‘takeover’ as one will always be the stronger party), then no one wants to knock on the door of the competition, because they fear they may be giving away their advantage and harming their position.

Being part of a network is a good way to overcome those professional inter-communication hang ups. I know that a lot of our members say how much they value talking to each other, with like-minded peers in a non-competitive environment. Moving on to greater co-operation seems a natural move.

Another area that seems to be generating resistance is in the area of developing multi-disciplinary working. It’s a very logical outcome of the opportunity offered by alternative business structures, getting all the complementary disciplines working together as a team and cross-referring. But few seem to be embracing the opportunity.

If the sector could see co-operation like this as the small step it is, it could be a giant leap for the profession.