What can we learn from Norway? 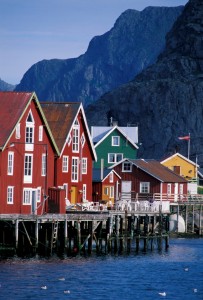 Norway: now that’s how you do property registration

Norway, a country of five million people, was ranked ninth in the ‘Ease of Doing Business 2014’ survey, one ahead of the UK. However when matched to the registering property index, Norway is ranked 10th, while the UK sits at a lowly 68th.

Late last year, our government sent a fact-finding group to Norway to learn about how the Norwegians have run their central government mapping, land registry and water information as a combined function successfully for the past 18 years. The feedback received is that Norway has an extremely efficient and integrated system for registering land and property data, which may provide some valuable lessons.

Norway used to run a dual property system with two electronic registers: the land register run by the courts and the cadastre run by the mapping authorities. These two agencies are now run as a combined National Mapping and Cadastre Authority (NMCA). This combined resource now feeds into a coordinated delivery system, EDR, which has in turn, a front-end portal called Infoland.

The new combined agency is run by a wholly owned limited company, NE, which reports to the Norwegian Ministry of Justice. NE has been in existence since 1995, when the land register was first digitised, and Infoland was created in 1999 as a government internet-trading platform which began by selling land information packages.

Similarly to the UK, Norway’s local authorities (431) are autonomous and can choose to connect to Infoland if they wish. Approximately 200 (around 75% by volume of registrations) were connected in 2007. However, unlike the UK, this portal allows real estate agents, banks/lenders, architects, contractors/developers and the public to derive packages of information and services direct from this singular point of access.

In the context of property registration, this central coordinating body allows for a much reduced process in terms of steps – ie, one step taking three days and costing NOK1060 (£106) plus 2.5% stamp duty, compared to six steps in the UK, costing £4,723-£11,910, plus 4.5% SDLT and taking one to four weeks.

The above analysis is all based on commercial conveyancing transactions and the examples used in the UK for the survey were in London. We know that the costs and time associated with completing transactions in London are higher and more costly, so this must be taken account of when drawing any conclusions from this survey.

Nevertheless, some obvious lessons can be taken. NLIS is the closest initiative in recent times which match the objectives of the Infoland project. This project was hampered from the outset by the focus on the local search as a driver and ignored the fact a healthy market already existed for an alternative supply of private local searches.

This, together with the enshrined rights of individuals to access public records, prevented the NLIS channels achieving the monopoly status they had hoped for. The advent of access to property records via EIR has further reinforced the ability for private search firms to add value in this very competitive space. The surviving NLIS channels have blended into the mix and have added investment and some corporate muscle that may have otherwise been absent from the search industry.

Home information packs (HIP), it now appears, was the innocent victim of political vandalism by all sides. In-fighting led to the home condition reports being removed and the reduced version of the HIP, as an enhanced energy performance certificate, was an easy target for the incoming coalition to sacrifice on the communities minister’s ‘bonfire of red tape’.

The great irony is that only last week an independent report from the Royal Institution of Chartered Surveyors recommended the introduction of the home report, which has been successfully enhancing the Scottish process for the last five years.

As a warning to the present architects of change, the Chain Matrix was a project conceived in the hope of ending chain break-downs. Run by the HM Land Registry, history shows the project failed due to a lack of real engagement with the lenders, property information industry and legal profession who were the intended ‘clients’ and users of their software and data tool-set.

So for the UK to succeed, we need to make some fundamental changes to the way such nationally important projects are conceived and built. Number one is proper engagement with the incumbent industry. All of the constituent parts are available to make a joined-up, efficient and cost-effective process to match the Norwegian Infoland, but the politicians and brokers of change must realise the UK property transfer market is not directly analogous with Norway.

It is more diverse and riven with vested interest. It is 10 times the size and with a lending community used to doing things their own way. We have established real-estate, valuation and legal markets which operate in silos and need to communicate closer to achieve the common aim. However, ultimately, the uniting factor for all of these factions is data.

The best the government can do to implement our version of ‘Infoland’, if that is what is desired, is to help the existing players to adapt to using better quality assured and timely digital data in parallel with any government-sponsored projects. History shows that this industry is incredibly resistant to enforced change without due process and communication.

Ronnie Park is a founding executive member of CoPSO, the Council of Property Search Organisations