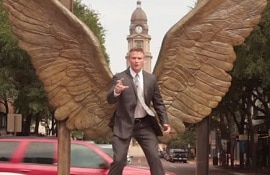 The Texas Law Hawk in action

American law firm advertising is a common source of amazement in our Curated House headquarters. Every so often, another US attorney’s advert will land in our inbox and quickly be shared around the office, often accompanied by audible gasps of disbelief.

One particular ad that springs to mind, sent to us by a client, was a feature on the BBC about the self-styled ‘Texas Law Hawk’ – a young Fort Worth criminal lawyer whose ads had been causing a stir in the States.

While these ads appear almost scandalous to those of us involved in UK legal sector marketing, this article asks the questions: Is there anything we can learn from them? What can we take away from the unabashed advertising of firms across the pond?

Perhaps unsurprisingly, it is the constitutional right of our cousins across the pond to promote their services. In 1977, the Supreme Court held that law firm advertising was protected under the first amendment as constitutional speech, in the case of Bates v State Bar of Arizona. The ad in question was sedate and decorous. It is hard to imagine it ever being the subject of serious litigation.

The contrast between Bates & Co’s polite offer of ‘Very reasonable fees’ and Jim ‘The Hammer’ Shapiro’s promises could not be more pronounced. In less than 20 years, American attorneys went from scarcely noticeable newspapers ads to TV spots that make the Transformers movies look subtle and restrained.

The themes and iconography used in many of these adverts are loud, confrontational, emotive, loud, repetitive and, most of all, loud. The imagery is similarly aggressive. Sledgehammers, chainsaws, apex predators, motorcycles and explosions feature heavily.

One personal injury lawyer even embraces the ‘ambulance chaser’ sobriquet by playing it for laughs. In his ad, he is seen hamming it up and chasing an ambulance down the street, the skit filmed ironically in the style of the original Adam West Batman TV series.

US attorneys take to TV to advertise everything contentious in nature – personal injury, divorce, criminal defence and anything and everything relating to suing another party. One survey estimated that 73% of US law firms advertise in some way (other than through their website).

By contrast, UK law firm marketing, and TV advertising in particular, is much more reserved. Why?

For many in the UK, our frame of reference when it comes to the archetypal US attorney might be restricted to such fictional characters such as the fast-talking, fee-chasing, morally-dubious individuals personified by either Saul Goodman of Breaking Bad or Lionel Hutz of The Simpsons.

While clearly exaggerated for dramatic and comedic effect, it might be fair to say that both offer a glimpse into the legal sector culture in the States. Hutz is an incompetent ambulance-chaser whose regulatory status is as dubious as his approach to attracting clients, while Goodman is the flamboyant, sleazy, crooked confidante of Albuquerque’s criminal fraternity.

Saul’s own TV ad plays up the super-litigious stereotype. In it, Saul asks “Who can you sue?” and then lists pretty everyone who could feasibly owe you a duty of care from the police and family members, to “your church, synagogue or other religious institution”, financial institutions, and companies in other countries. The possibilities, as Saul says, “are limitless”.

As with all great humour, this skit has truth at its core. The approach of the US attorney to advertising is strongly influenced by the US legal system and American society and culture. Inherent litigiousness, a lower threshold for claims (and far higher potential pay-outs) and a looser approach to what is and isn’t a justiciable issue make the law, particularly contentious matters, a much more lucrative endeavour in the States than in the UK.

American society arguably creates the atmosphere for their legal culture to thrive; a far greater necessity for claims and litigation and rewards of a successful outcome that are far higher. For example, someone hurt at work in the UK has statutory sick pay, protection from dismissal, free healthcare and prescriptions and, as such, will probably be less of a mind to pursue a claim.

Someone with the same injury in the US may find themselves summarily dismissed and in receipt of an enormous medical bill. Small wonder that they prefer the sledgehammer-wielding Rottweiler persona over the conciliatory tone of UK personal injury lawyer marketing.

Another factor that creates the environment for lawyers like Bryan Wilson to succeed is that we live in the YouTube generation.

While today’s legal consumers are better informed, more discerning, more likely to shop around and more internet savvy, the natural corollary is that they have reduced tolerance to traditional marketing, experience greater competition for their attention and respond better to immediacy, emotion and virality rather than more considered and thoughtful advertising.

This is particularly true where distress purchases are concerned. The younger generation, and millennials in particular, communicate in blurbs and soundbites, which fits nicely with someone like the Texas Law Hawk’s style.

What can UK lawyers learn?

Appreciating that this is no small ask for a profession that is traditionally so risk averse, but you need to get over the initial discomfort of putting yourself out there and being in the public domain.

Crucial to creating a marketable profile is the willingness to cast off the reluctance to self-promote. Finding a niche, becoming the go-to person in that niche then trading on that reputation can’t hurt, right?

We’re not suggesting that you go full Texas Hawk, but during this time of unprecedented change in the legal sector, if you aren’t instantly visible, more appealing and shouting from the rooftops about how you offer a different, a better service that your competition, you are missing out on an opportunity that you can rest assured your competition will be looking to take advantage of.

As Saul Goodman says, “some people are immune to good advice”. I’m sure that doesn’t include you.