This is just the beginning 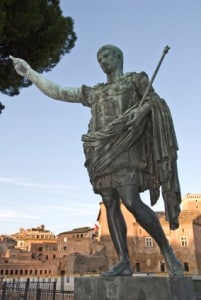 Hail Caesar: the Roman knew the importance of making a will

It has been quite a couple of weeks. Far from taking a break for the summer, the imminent arrival of alternative business structures (albeit not quite as imminent as expected) has seen the legal market bubbling over.

In no particular order, we have reported (largely as exclusives, I should point out): the entry next year of US online legal services LegalZoom and Rocket Lawyer to the UK market, the plan for what could be a national chain of law shops, the world’s first listed law firm (from Australia) eyeing up expansion into the UK, the Co-op planning a more extensive pilot of face-to-face legal advice, a subscription legal advice service from CPP that could soon be offered through a string of big brand names, the roll-out of Blakemores’ successful Lawyers2you shopping centre concept, and even Chinese and Indian firms being offered the chance to use ABSs as the way to start building a global practice.

Virtually each one of these is worthy of a blog of their own, but in the absence of the time to do that, there are various themes worth pulling out.

First of all, let no one be in any doubt now that change is coming. There are no guarantees that any of these ideas will work, but there is clearly a real will among a substantial number of people to give innovation in the legal market a go. The influx of foreign interest and capital will not do the UK economy any harm either.

Second, rather than worrying solely about shifting market share from traditional providers to new ones, we should also recognise that all of these initiatives will make legal services more accessible – taking the law to the consumer, rather than making the consumer seek out the law – and help to stimulate unmet legal need, to the benefit of the public and those who advise them.

All the research indicates that this is a significant need. As Charley Moore of Rocket Lawyer observes, the idea of a last will and testament is an ancient one (Caesar lodged his at the Temple of the Vestal Virgins, he notes) and yet still more than half of the population of the US (and the UK) has not got one. The changes wrought by the legal aid bill may make it harder to stimulate, but talking to after-the-event insurers in particular, it is clear that we can expect innovation around funding too.

Third, several of these operations involve giving away quite a lot of legal advice, albeit of a generic nature, for free. Talking yesterday to the likes of Guy Barnett at Blakemores and Joe Simpson, head of contract legal services at Irwin Mitchell (which sits behind CPP’s Your Law product), it seems the difficult trick is providing enough information to satisfy the caller, while also exploring the possibilities of converting them to fee-paying clients.

Conversion, rather than generating the leads, is the difficult bit, but firms need to be mature enough to recognise that a consumer who goes away happy with 15 minutes of free advice will probably return months or even years later when they have some more substantial work that needs doing.

But this free advice also backs up one of my central theses of the Legal Services Act reforms: in an era of easier access to basic legal information, lawyers need to focus on those parts of their work for which consumers really need them (and will pay) – so, not cutting and pasting boilerplate into a will, but giving focused and expert advice on the two or three clauses that materially affect their personal situation.

That there will be more and more online document assembly systems – which surely firms should be embracing internally as workflow tools, whatever their client generation potential – only goes to strengthen the argument.

Fourth, many of these initiatives provide opportunities to existing law firms that are bold enough to take them, rather than herald non-traditional competitors entering the market. It is, I am sure, becoming increasingly difficult to decide between the various options (for example, QualitySolicitors v HighStreetLawyer v face2face solicitors v Lawyers2you), but at least for firms that have decided they need to do “something”, there are quite a few somethings to choose from.

Fifth, lawyers can be entrepreneurs. It would be ridiculous to suggest otherwise, of course, but that’s the general stereotype (and not without some reason). Guy Barnett is an excellent example. Having spoken to him several times, there is no doubting the passion for what he is creating with Lawyers2you, and he has the impressive statistics and research to back up its success. More than anything, he understands his market.

Having the infrastructure and economies of scale in place, the expansion of Lawyers2you will essentially be self-financing through the franchise fees, and if for whatever reason the roll-out doesn’t work, then he can go back to what he has been doing in the midlands. Just look at the figures – Lawyers2you generated around 4,800 leads in August. Say Blakemores converts a quarter of them into fee-paying work and one can but assume that Lawyers2you more than pays for itself.

Finally, this is surely just the beginning. Most of what we are seeing so far does not require the liberalisation of ABSs, but it has taken the mood music of the Legal Services Act to make them happen. You cannot help but wonder what might be waiting to pounce when the Solicitors Regulation Authority actually starts licensing ABSs.