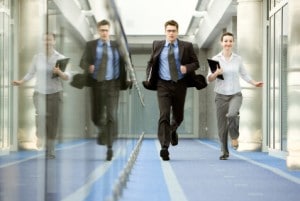 SRA staff realise that another deadline is looming

The Solicitors Regulation Authority has been celebrating the first year of its ABS licensing regime. It is not just a numbers game, but with 74 licences granted in that time and 300-odd still inching their way through the application process, it perhaps hasn’t necessarily been quite as glorious a first year as the SRA is making out – another way of looking at it is that there is a large backlog – but it has certainly been interesting given the range of approvals.

There has been a notable pick-up in the pace of licences awarded in the last month or so. This in part reflects that the large number of early applicants have finally won approval after several months of to-ing and fro-ing, and also (hopefully) that the SRA is finally getting to grips with the process, and in particular with the more straightforward applications that simply involve non-lawyer partners, the delay in approving which has been hard to understand.

One new licensee told me recently that he felt as though the SRA was learning as it went along. As ever with new regimes, those who have had to struggle through it in the early days have only served to make it quicker and easier for those coming behind.

The problem continues to be the period between a party submitting the detailed stage 2 application and the point at which the SRA deems it to be complete and raises an invoice, payment of which triggers the formal decision-making period and a time limit of six months, extendable by a further three.

But unlike stage 3, there is no time limit to stage 2 and I have heard many stories of long periods of silence and applicants trying in vain to contact the ABS team. What often then follows is a sudden and urgent request for information from the SRA, and then more silence. At the same time, applicants find the individuals within the ABS team friendly and helpful – when they can get hold of them.

If the SRA wanted to improve its performance, then introducing time limits on both stage 2 and responding to calls and correspondence would go a long way. If it cannot do so, then that perhaps implies insufficient resourcing.

It is not lost on solicitors that if they were as dilatory in dealing with the regulator as the regulator can be when dealing with them, then they would get into trouble. As further examples, I have recently encountered no shortage of frustration and exasperation from solicitors still waiting for their COLP and COFA approvals, or who had to wait for their practising certificates, despite having done everything by the book.

The COLP and COFA issue is difficult. The SRA argues that it has been surprised by the number of firms that have either not engaged with the process at all or nominated unsuitable people, and it has therefore concentrated more resource than expected on them. This is reasonable enough from one point of view, but those who have done nothing wrong do not see why they should be put to inconvenience by them.

But the pre-Christmas message to solicitors that ‘no news is good news’ if they had not heard anything by the end of the year was not exactly an impressive way to operate (imagine what the SRA would say if solicitors told clients that in lieu of actually contacting them about their case), especially given the warnings about not having the officers in place.

One still hears that part of the problem is the IT legacy the SRA inherited from the Law Society (and anyone who knows anything about it accepts that it was terrible), but north of £20m of solicitors’ money has been thrown at the SRA’s so-called ‘enabling programme’ to upgrade its IT and so that excuse won’t really wash.

That there was no repeat this year of the IT problems with practising certificate renewal, and indeed that COLP and COFA nominations caused no great technological issues, indicate that the problem is more at the human end of the process.

It comes back to the question, raised by my colleague Dan Bindman in a blog last week, of whether the SRA practises what it preaches. I have had the impression for some time that while the board and senior managers of the SRA say all the right things – and I have no doubt that they are sincerely meant – the reality on the ground for solicitors dealing with the authority is the ‘old’ SRA attitudes and approaches are still around.

I readily acknowledge that this is based on anecdotal evidence, albeit a fair amount, and that the SRA has in some ways taken great strides – plus personally I find those I deal with sensible and pragmatic. The red tape challenge is a good example of both the problems at the SRA and the willingness to find solutions.

But ultimately the SRA has not helped itself in recent months and years, and until it stops making excuses and simply gets things right, then the SRA will struggle to convince those it regulates that it deserves their trust.