The sorry tale of a fallen giant 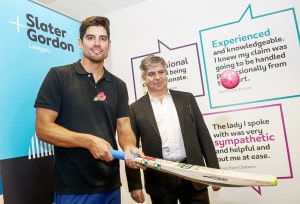 It is somewhat appropriate that Slater & Gordon sponsors England cricket captain Alastair Cook, no stranger himself to sudden collapses.

Yesterday’s results could not really have been much worse, for owners, investors and staff alike, with those in the UK now bracing themselves for redundancies.

Schadenfreude abounded on social media and some websites, but the real shame is that, until last year, Slater & Gordon was a significant success story.

The first listed law firm in the world, it had used its access to capital to grow phenomenally in Australia before coming over here and doing the same. After laying down its base with Russell Jones & Walker, it bought good, solid firms like Fentons. Revenues were up, profits were up, and the poster child of external investment polished its halo.

And then came the decision to buy Quindell’s professional services division. Many questioned the deal at the time given the bad smell around Quindell, but concerns focused particularly on the valuation, which required S&G to load itself with debt. Last August, I gave them the benefit of the doubt, relying on the firm’s unparalleled experience of acquisitions and the due diligence they had carried out.

But there’s nowhere to hide for a listed company and the figures from the second half of 2015 indicate that this confidence was woefully misplaced. S&G bought a pup and they cannot say they weren’t warned.

How the due diligence went wrong is a big question, but ultimately, I think S&G simply bit off more than it could chew. It bought a business that was valued (at the time) at more than S&G’s combined Australian and UK operations and doubled staff numbers overnight.

The firm’s management also seriously underestimated the reputational damage that came with Quindell. Changing the division’s name to Slater Gordon Solutions (the absence of the ampersand has bothered me from the start) helped not one jot. The share price went into freefall and it’s all been bad news since.

But equally S&G could not have predicted the latest round of whiplash reforms announced in November’s Autumn Statement. While a return to the question of raising the small claims limit for personal injury was not a surprise – even if the timing was – the possibility of completely banning claims for general damages in ‘low value’ whiplash cases came totally out of the blue.

S&G continues to depend heavily on PI in the UK, and bought from Quindell a business that specialises in precisely the kind of cases under threat. That is not a happy place to be, and is a macro version of the worries that are spilling across much smaller PI firms.

So where now? That rather depends on S&G’s lenders and whether they are willing to renegotiate the terms of its debts. The firm is working on a restructure proposal to take to its banking syndicate this month. Any amendments made to its debt facility must be made by the end of April, but if no agreement is reached, the earliest the debt can be called in is 31 March 2017. If this happened, how could the firm possibly pay off £380m (as of 31 December 2015)?

Restructuring in the UK is also underway; just as alarming as the goodwill write-down was the underperformance of the operation over here. Although turnover continued to rise, earnings dived as cases didn’t conclude on the expected timescale. Where did that come from? Many believe that the future of personal injury is large practices benefiting from economies of scale and so on – S&G is set to be the test bed for this theory.

But you know they’re in trouble when part of the plan is to “actively” engage with insurers with the aim of reducing frictional costs and delay. Except for those that are clients of SGS’s motor business, I can’t imagine the insurance industry rushing to aid such a prominent claimant firm out of its hole.

The Solicitors Regulation Authority for one will be hoping S&G sorts itself out – dealing with a firm as big as this if it all goes wrong could be a near-insurmountable task.

But many of those commenting on yesterday’s news see it as further proof, were any needed since the collapse of Parabis, that the alternative business structure experiment is condemned to failure.

I still don’t see it that way. S&G was a successful firm that appears to have made a monumentally bad business decision. That has nothing to do with being an ABS, except that it was able to raise some of the cash for the deal from shareholders. Maybe this access to funding encouraged S&G to overreach itself.

But ABS is just a means to an end; it is no golden bullet for business success. As I said last August, what has happened doesn’t point to any inherent weakness in ABSs.

It’s also worth noting that creditors lost even more (about £200m) from the failure of Halliwells, a ‘traditional’ law firm, than they are set to from Parabis.

This is all of little consolation to those staff at S&G worried about their jobs. S&G has not become a bad firm overnight and let us hope that those who took the firm to the summit and then pushed it down the other side, are able to get this legal business back on solid footing.