The problem with paralegals 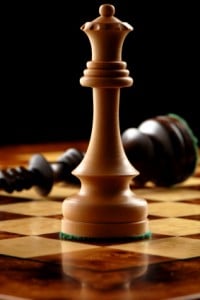 Check mate: who will win the battle for paralegals?

Monty Python fans will recall the scene from ‘Life of Brian’ involving the People’s Front of Judea, the Judean People’s Front and the Judean Popular People’s Front. Well, it sometimes seems that this inspired those jockeying for position in the paralegal world. We have the National Association of Licensed Paralegals, the Institute of Paralegals and the Society of Specialist Paralegals.

Now, as we reported yesterday (see story here), we have the Law Society potentially moving into their market by investigating whether there is any scope for it to develop a paralegal qualification. This is perhaps inspired by events north of the border, where the Law Society of Scotland, in association with the Scottish Paralegal Association, will next month launch a ‘registered paralegal’ scheme. (To join the association, interestingly, paralegals have to give the roll number of the solicitor who supervises them, unless they are unemployed, retired or students.)

Under the scheme, registered paralegals – who will have a certain level of experience and qualification – will work in support of a practising Scottish solicitor in delivering legal advice to clients. They will work according to competencies and adhere to a code of conduct aligned with Scottish solicitors’ code.

But while the Scots are clearly focusing on those paralegals working under solicitor supervision, the problem down here is that ‘paralegal’ is interpreted more broadly, even if it not a defined term, making it difficult to represent and/or regulate them. Each body has its own attempt at explaining the word, but perhaps the most interesting are two efforts from the Institute of Paralegals: “Someone who is not a lawyer who does legal work that would previously have been done by a solicitor or barrister”/“Someone who does legal work that a solicitor might do, and if he/she did it would charge for their time.”

This hints at one of the reasons paralegals are an increasingly important issue – even before alternative business structures are expected to develop their use, paralegals (and for these purposes I would describe them as people doing legal work without a full legal qualification) are finding themselves handling work that not that long ago was the preserve of a solicitor or legal executive (less so a barrister, I’d guess). Volume conveyancing and personal injury practices are the obvious examples.

Another reason is that, given the shortage of jobs out there in the profession right now, a lot of legal practice course students are having to take paralegal jobs (see my Guardian blog this week on the lot of law students here). A more formal recognition of their role, and perhaps making it an end in itself, may be desirable. This could be where the Law Society’s interest ultimately focuses.

The move to entity-based regulation helps control paralegals’ activities from a regulatory point of view, but if they are doing unreserved legal activities, then they have no need to be in a regulated business at all – will-writers, essentially, are paralegals from this perspective.

The fact that the term is not defined makes it impossible to estimate how many paralegals are out there, but there seem to be enough to make offering some kind of membership and qualification a financially sound proposition. It was less than two years ago that the Law Society of England and Wales wanted to establish a new membership category for non-solicitors, the motivation of which was at least partly financial, but this was voted down by the existing membership.

Interestingly, in Ontario in Canada, the government in 2007 forced the local law society to take on the regulation of paralegals. They only need a licence if appearing before a court or tribunal, but it sets an example that to date nobody has followed. Neither the Ministry of Justice nor Legal Services Board has yet really to address the issue, although events in Scotland may well make more people sit up and take notice.

But what strikes me as slightly redundant about this debate is that, in the Institute of Legal Executives (ILEX), we already have a structure largely in place to address the paralegal issue (ILEX has no Scottish equivalent, it is worth noting). I should remind readers that I edit ILEX’s journal, but I think the point stands regardless of any perceived bias on my part. ILEX already has around 14,000 paralegals/support staff in its membership, and as well as its professional qualification, it has offered paralegal and legal secretary qualifications for more than 15 years.

It offers a clear path to becoming a fully fledged lawyer whatever your background (including a fast-track qualification for LPC graduates), as well as the opportunity to become a partner and a judge. With ILEX seeking the full complement of practice rights, frankly it will soon make little practical difference whether you are a specialist solicitor or a specialist legal executive. Plus the Institute does not have to prove its credibility – after nearly 50 years in existence, ILEX and its members have plenty of that in the bank.

So paralegals appear to be a problem with a ready-made solution. Perhaps it should it be up to the Legal Services Board to bring order to what might otherwise become chaos.