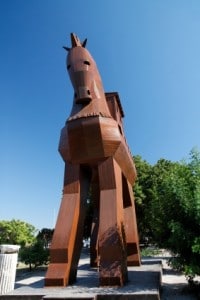 ABSs are the Trojan Horse in the battle against referral fees

The practice of law firms paying a claims management company or insurer to have a case referred to them was ugly, drove unethical behaviours and placed commerciality above the rights and needs of injured people. It was rightly banned in April 2013.

But even before it came into place, John Spencer, the director of my legal practice, Spencers Solicitors, was underlining how the then-proposed ban lacked clarity. And that it could be exposed to loopholes.

One loophole in particular was alternative business structures (ABSs), and as early as September 2011, John warned that this was a “Trojan Horse in the battle against referral fees”.

He wasn’t alone in raising concerns. Now two years on, his words have a somewhat prophetic feel about them.

Over the last couple of years we’ve witnessed insurance companies absorbing legal firms into their structure – or stowing them in the belly of their Trojan Horse, if you will – in order to continue generating maximum income from the personal injury process.

The cash previously generated through the referral fee has simply been replaced by taking a share of the solicitor’s profits.

John voiced even stronger concerns about this particular issue with ABSs, in the wake of the ban taking effect. He asked: “If an insurance firm owns and controls a legal practice, then it can manage the entire claims process. So, instead of benefiting only from the payment of a referral fee, which is banned, the insurer now benefits from all the fees to be earned by a solicitor in respect of pursuing a claim.

“How is that an improvement in the position before referral fees were banned? Surely it exacerbates the situation rather than improves it?”

And his points were indirectly echoed by the Law Gazette, which noted how two of the UK’s biggest car insurers, Admiral and Ageas, responded to the ban by setting up joint ventures with law firms.

It said: “In effect, they have put up the shutters and taken the profits they make from selling their customers’ details in-house. Referral fees? Not at all officer, we simply point our loyal flock on to a trusted legal brand which happens to be inextricably linked to us. Nothing to see here.”

The problem? According to the Legal Aid, Sentencing and Punishment of Offenders Act 2012, what these insurers are doing is entirely legal and in no way contravenes the referral fee ban.

So nothing new here. Insurers have identified a loophole, exploited it, and the consumer suffers.

As we know, the ban was originally put in place partly to stitch the hole in the pocket of the insurance industry – which was blaming its rising car insurance prices on the cost of paying out for too many compensation claims (many of which were reported as fraud).

However little did the public know that it was the insurers who instigated some of these claims in the first place – passing on road accident victims details to lawyers with whom they had a referral relationship.

In exchange the insurer would receive a fee – a nice, easy way for insurers to generate cash from every accident claim.

The only difference now, under an ABS arrangement, is that the insurer benefits from the lawyer’s fees directly, so there’s no need to for a referral fee to change hands. And the client information can be passed to the solicitor for free – legally, and all under one roof as an ABS.

I’m not calling for a ban on the ABS model as there are positives. It can bring new investment and innovation to law firms and as written here, there are ethical uses for the ABS model out there.

But the insurance sector is using the model circumvent the ban, potentially restricting freedom of choice to injured people, and getting away with it. It’s up to the Ministry of Justice to take action and do a little more stitching itself.