The Battle of LASPO, starring referral fees as the Trojan horse 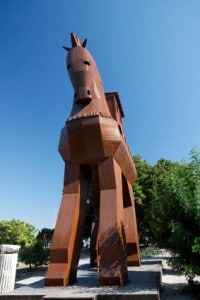 The Ministry of Justice (MoJ) seems in undue haste to push the Legal Aid, Sentencing and Punishment of Offenders Bill – snappily nicknamed LASPO – through the House of Commons.

Having broken parliamentary convention by not allowing two weekends between presenting the bill to Parliament and the second reading last week, the government wanted it to start the committee stage today. However, after protests from the opposition, this will now begin next Tuesday.

The committee – membership of which is as yet unknown, although it will apparently be chaired by a Conservative – is to meet nine times. According to Labour justice spokesman Andy Slaughter MP, the first three, to be held before the summer recess on 19 July, will be evidence sessions. There will be a further four meetings, where the process of going through the bill line by line will begin, in the short session in early September before the party conferences, with the remaining two when Parliament gets back into full swing in October.

The plan is for the bill to be out of committee by 13 October and out of the House of Commons by the end of that month, earlier even than the predictions that were being made just last week.

The reason for this, it is said, is that the MoJ knows the bill will get a rough ride from peers. The government needs as much time as possible to negotiate the House of Lords so as to keep on track to finalise the bill next spring and bring it into force in autumn 2012.

So what we will see over the next few months may be an awful lot of marker placing – Labour is realistic enough to know that it will not win many, perhaps any, votes in committee, but it will want to send signals to those in “the other place”.

Various coalitions will form to lobby on the bill. Yesterday groups such as Friends of the Earth, Amnesty and Liberty met with Mr Slaughter at Westminster to discuss the impact of the Jackson reforms on international human rights cases – the view of group action warrior Martyn Day of Leigh Day & Co, he of Trafigura fame and much besides, and other lawyers in the room was that the changes would mean they would have to stop taking on riskier cases.

This would potentially deny redress to those in developing countries who have suffered wrongs committed by UK companies.

While noises from government have indicated that this is an unintended consequence of the reforms, it might be difficult to secure a carve-out for such cases – because then every other niche area of practice would start asking for one of their own.

Bound up in all of this is the Association of British Insurers’ (ABI) assault on referral fees, along with Jack Straw’s. There is a sense that while the MoJ was not planning to act on referral fees, Mr Straw’s intervention may have changed the dynamic – although I did think rather too much was read into Ken Clarke saying in Parliament lat week they would look at referral fees, given that the MoJ was already doing that following the Legal Services Board’s report. Further, there would be little resistance from Labour to a ban.

But referral fees are just a Trojan horse and I’m surprised the Law Society isn’t treading more carefully. While the Law Society and ABI are making common cause in their loud opposition to referral fees – the society said yesterday that it was “pleased” by the ABI’s stance – the latter’s real objective is slashing the current levels of fixed fees/predictable costs and guideline hourly rates. That is where this meeting of minds comes to a shuddering halt.

Because that is also where the “win” is for the insurance industry. There would be no gain to defendant insurers in banning referral fees if the level of legal fees they pay out remains the same. Claimant lawyers have always been vulnerable to the argument that they can pay an £800 referral fee out of the fixed fee of £1,200 for a simple road traffic case and still turn a profit. Just how much fat does that mean there is in the system? As I questioned last week, it comes down to how much is reasonable to allow for marketing costs.

When justice minister Jonathan Djanogly talks about reducing the amount of money swilling around the system that allows for referral fees flying off in every direction (not just to the lawyers), this is surely what he means.

And looking longer term, AXA identified the even bigger “win” for insurers in the statement issued last week about its decision to stop charging referral fees. It said: “What is ultimately needed, however, is a fundamental evaluation of whiplash and other minor ‘trauma’ claims to eliminate fraud and bring some sense back to the cost of these claims.” Denying that people actually have an injury to sustain a claim is an even better way to reduce costs.

Throw in the legal aid cuts and whatever direction they look in, there is danger here for claimant lawyers. But while there is a fair degree of unity among legal aid campaigners, that is noticeably lacking among the anti-Jackson brigade. Quite why they don’t bury their differences and present a strong, united front at this most critical of moments is quite beyond me.