Tea and sympathy for the SRA? 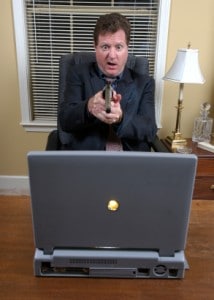 A solicitor trying to renew his practising certificate online

Hands up who feels sorry for the SRA. You at the back? Anyone? Just a smidgen of sympathy?

I thought not – that certainly reflects what I hear from solicitors as I go out and about. The possibility of finding practitioners who might have been minded to give their regulator the benefit of the doubt has been extinguished by the practising certificate (PC) renewal fiasco.

The Law Society (by which I mean the corporate entity of which the SRA is part) has a long history of mucking up IT projects; those with long memories will recall the high street starter kit as possibly the first. I remember the Law Society staff Christmas pantomime a decade or more ago featuring a character called Regis the Robot, named after the IT system that has blighted the society for many years – Regis would stagger briefly round the stage before seizing up, only to restart when money was thrown at him.

Certainly in implementing its expensive new IT system, the SRA has found itself up against various problems – chief executive Antony Townsend recently revealed that one glitch was caused by a large number of incomplete old paper records listing solicitors’ dates of birth as 1 January 1980.

No doubt next year all will be fine and the profession will start to see the promised benefits of the new IT, but the SRA will take longer to recover from the damage done to its reputation – a matter I know is of great frustration to those at the top of the organisation. Rightly or wrongly, the PC renewal saga has made the SRA a laughing stock with those it regulates, significantly reinforcing prejudices against the authority.

It is not a good time for this to happen – if the SRA can’t issue a PC without a humungous palaver, what confidence can one have in its ability to assess the acceptability of new businesses and innovative structures applying to become ABSs? Of course there is no connection between the two, but it feeds the perception of ‘same old SRA’ and destroys efforts to promote the idea that the SRA of the outcomes-focused regulation era has changed from what was seen as the uncommunicative, unsympathetic, unrealistic, nitpicking, ‘nanny knows best’ body that existed before 6 October 2011.

And it is hard to have sympathy with the SRA – it may have been battling the legacy of what came before, but this project has been years in the making and something must have gone wrong if it is only as the system goes live that so many gremlins are uncovered.

But it is also worth remembering that projects of this nature are group efforts, shared services that are approved by the Law Society council – and the system will have benefits for the rest of the Law Society. However, I’m unable to say to what extent, if at all, the Law Society (by which this time I mean the non-SRA bit) may have contributed to the problems. If nothing else I suspect the difficult internal governance structure hasn’t helped and it is noticeable that the society has not been very vocal on the issue.

A Law Society (representative bit) spokesman had this to say in a statement: “Renewals are primarily an SRA responsibility, but we are obviously eager for the process to work efficiently and effectively. Online PC renewal will eventually offer many benefits for the SRA, the Law Society and its members, but this year’s process hasn’t gone as well as it should.

“We have relayed the concerns of members about their experience of the system and of the helpline to the SRA, and offered support to members whose renewals have proved problematic.

“IT is provided on a shared-service basis to both Law Society and SRA, with each body specifying its requirement to a combination of in-house and external suppliers. The council has commissioned a lessons-learned review – for SRA and Law Society – which has yet to be completed. In the meantime we will continue to work with members and the SRA to minimise difficulties and delays and keep members informed of developments as they arise.”

I wonder if that review will be published.

Fortunately I am not in practice, so I don’t have to deal with the SRA in the same way as those of you reading this (I just hope my application to stay on the roll will not be as fraught as PC renewal). All I can say is that the impression I get from the people at the SRA I deal with – senior directors, board members and so on – is of an organisation that is genuinely committed to achieving its laudable, post-OFR goals. I accept that it may still have some way to go to translate this into how the organisation actually operates.

So while I’m not overflowing with sympathy for the SRA, I am prepared to give it the benefit of the doubt. But given the events of the last three months or so, I may well be alone in that.