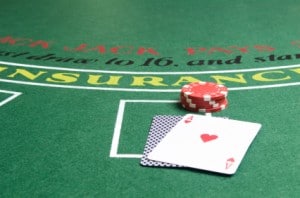 Legal blackjack: play it safe or go for the jackpot?

Until recently barristers have not featured that much in talk about alternative business structures, partly because their conduct rules prohibited them even from joining legal disciplinary practices (LDP) and also because theirs is a business (if I may call it that) which seems likely to be less affected than others in the legal profession. Advocacy is hard to commoditise, while a law firm-style structure for chambers raises difficult problems around conflicts of interest and the like.

So, many barristers have largely ignored what is happening, even more than solicitors, I’d say. I have done some training sessions at chambers about the Legal Services Act, much of which seems to come as a surprise to many of them. Yet even if their side of the profession is less affected than others (itself a big ‘if’), they ignore the impact on their sources of work at their peril.

I’m no law firm consultant (although I’ve sat through enough of their talks at conferences over the years to feel like I almost am) but I don’t think I’m overstretching myself to say that barristers, along with every other legal business, need at least to consider what the Act means for them. Even if they decide it will have little or no effect and that they are not going to change a single thing as a result, then that is a positive decision rather than one made by default because they can’t be bothered to think about it.

Because the reality is that these reforms are starting to seep into the bar. Now that barristers can join LDPs, they have begun doing so (we reported on the very first one, in fact – see story), while this week the Bar Council unveiled the structure of a corporate entity that can be attached to chambers and used to bid for work and so on (see story). “ProcureCo” is an option that gives chambers a considerable amount of flexibility if they want to change their business models and, interestingly, it also provides the opportunity to compete with solicitors. The detailed paperwork accompanying the launch notes how chambers could bid for work and then sub-contract work they cannot do to a panel of solicitors.

Barristers instructing solicitors – for some barristers, the chance to get their own back is, on its own, probably a good enough reason to set up a ProcureCo. But before they get carried away with the idea, do they really want to start going into competition with solicitors? Certainly it would be a brave move if it meant annoying those firms that currently send them instructions. The same goes for those barristers who take up the option both of joining an LDP and staying in self-employed practice in chambers.

At the same time, the junior bar in particular is under huge pressure from all directions – criminal prosecution and defence work is on the wane, for example, while fast-track personal injury work could disappear if Lord Justice Jackson’s recommendation that their fees should not be treated as disbursements comes to fruition.

I had a discussion about the future of the junior bar with one of the sets I was training, and they confidently stated that their juniors were busier than ever. When we drilled down a bit, however, it turned out that this work largely involved being led; the opportunities to cut their teeth on their own caseload were diminishing.

So innovation and new sources of work are urgently needed, one could argue, if would-be barristers’ future is not to be training at large law firms before eventually specialising in advocacy. But what impact will that have on existing business?

Stick or twist? It is not an easy decision.