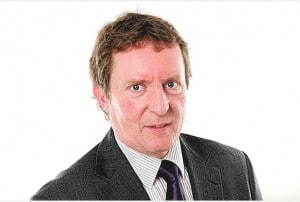 Johnstone: inevitable improvement in the average levels of risk management

A few weeks ago I was asked to speak at a Westminster Legal Policy Forum seminar on the impact LASPO has had on the claims management sector, which attracted nearly 100 delegates. The keynote speakers were Crispin Passmore, executive director of policy at the Solicitors Regulatory Authority, and Kevin Rousell, head of the Claims Management Regulation Unit at the Ministry of Justice.

Given only five minutes of talk time, it was difficult to go into depth, but I did get a chance to discuss the management of risk in claimant personal injury (PI) firms.

In my view, the most exciting and best outcome that will be driven through the industry as a result of LASPO is the inevitable improvement in the average levels of risk management within claimant PI firms.

There have always been firms that excel in terms of managing the risk associated with working on matters remunerated on a speculative basis and those firms tend to also deliver exceptional customer service.

While the noughties did have the positive impact of raising awareness of the rights of recourse in certain circumstances, the extremely attractive remuneration levels and the pre-packaging of work by claims management companies (CMCs), resulted in a rapid expansion of firms with a significant exposure to claimant PI work which did not necessarily have risk management skill sets within the firm. It significantly diluted the average service the general public received and the good firms became obscured by mediocrity.

In fact, the remuneration levels were so high, a firm could remain financially viable despite poor customer service or being extremely inefficient.

To put it into perspective, the average fees on general PI work pre LASPO in England and Wales were roughly four times the levels achievable for the exact same work via Judicial Scale Charges in Scotland. Given that it was the same liability insurers paying the bills both side of the border, it’s little wonder they were a bit jumpy about the legal fees in England and Wales.

The exciting bit is not the reduction in fees per se but the behaviour that will bring. In Scotland it is simply not possible to work on very many matters you do not get paid on, but in England and Wales firms were losing as many as seven out of ten matters, leaving many clients disappointed by false expectations and the service they received.

The need to be good managers of risk has resulted in the numbers of firms specialising in claimant PI in Scotland dropping dramatically over the decades and this could happen in England and Wales.

It is this concentration of specialism into a limited number of firms that not only drives up the average standard of care the client receives, but also has an impact on the routes to markets or, more specifically, the CMCs firms are prepared to deal with and ultimately the standard of case that is presented to the third-party insurer. The economics of claimant PI may be the biggest influencer on how work is acquired, as opposed to just a ban of referral fees.

Access to justice in this context, to my mind, was never meant to create a right to have your case worked by a qualified solicitor regardless of its merits. Up to that point, most working in claimant PI did so because they wished to champion David in the David and Goliath scenario; LASPO might ultimately bring that sense of pride back to those professionals who take the opportunities it presents.

Changing tack slightly, if the suggestion is that the number of firms working in the claimant PI sector is going to fall dramatically, why has it not happened to date? Well, it has started and more recently there would appear to be an increasing acceptance in firms that have not evolved that it might be time to change direction; as the rods in the pond reduce, the opportunities for those good risk managers to increase their market share start to crystallise.

The graph below accurately depicts the revenue curve of cash thrown off a general book of PI pre LASPO; it attempts to overlay post LASPO revenue on a similar book of business allowing for a deduction from damages in lieu of a success fee. 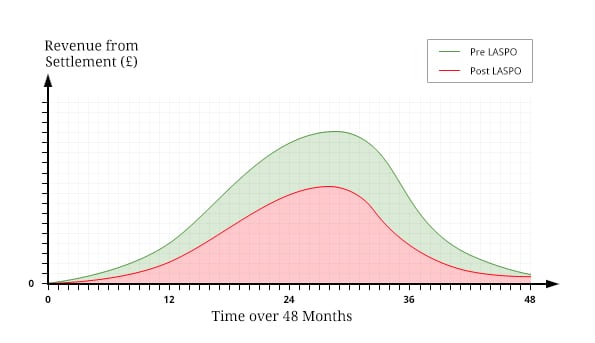 [3]The long tail of any claimant PI book suggests that it is potentially only now that the really serious reduction in cash receipts highlights itself if you haven’t been aware of what is coming, as up until this point it could have been masked by the liquidation of earlier WIP. Your 2015 balance sheet might be the first to show the depleting asset without a corresponding reduction in liabilities.

The earlier firms that wish to, or need to, step back and engage with the process, the better the outcome both for the principals and the clients.

But they could be better supported. During the seminar I got to speak to Lord Kennedy of Southwark and Kevin Rousell about the possibility of a more proactive role from the Law Society, Ministry of Justice and SRA to assess or convey to small firms the destabilising effect LASPO has on their business. Firms are facing hard times, but there seems to be a lack of desire for them to engage with these organisations.

What I would like to have said is that there are solutions that can help claimant PI firms avoid discounting asset values and potentially facing insolvency, which ensure client confidentiality and the seamless transfer of files, offering the best possible outcome for claimants while preserving the situation where the value created remains with the party that created it.

But we weren’t really there to talk about our own business – so I had to leave that for another time.