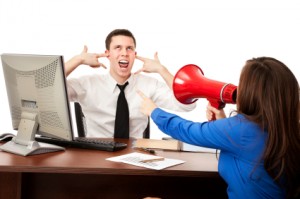 I can’t hear you – what will happen if a firm’s leadership will not listen to their COLP?

I regularly sit down with people from teams across the business to talk about the performance of law firms on our panel and firms that have made enquiries about membership. One of the agenda subjects is ‘quality’. It’s a hard thing to define but generally we are asking ourselves ‘does what we have learnt since the last meeting that may change our view of any of our panel firms, past or present?’. We talk about many things but pay a lot of attention to customer feedback, good and bad.

The customer and employee led feedback often raises small isolated issues but sometimes it’s possible to see patterns start to emerge. From time to time we see patterns developing that are difficult to categorise but are enough to form a general concern that attention to customers does not appear as high on a law firm’s agenda as we think that it should be.

So, I always take the stance that it’s appropriate to asked firms for their thoughts. Are there any patterns or particular circumstances that may inform our views? Many firms are happy to oblige but, from time to time, we will receive a response that, rather than allay our concerns, does more to confirm them. Reduced to soundbites, they can follow the ‘attack is the best form of defence’ methodology, including comments such as: it’s not them, it’s the clients, they (the client) have behaved unreasonably, the clients have misunderstood, the work they do is of high quality or our perception is incorrect because we have called at the wrong time or spoken to the wrong person.

When I receive this type of response I wonder whether I should break it down, explain it to them but I sometimes get the feeling that the firm or the individuals will not be listening – it’s a stance I’ve seen before and I suspect I will see again. There is nothing customer focused about this type of response, no desire to take a look at behaviour or to use the experience as a learning curve.

In approaching the firms I’m not looking for some ‘cap in hand’ response but an insight into whether the behaviours that we are seeing are part of a bigger pattern or had perhaps been simply an unhappy but unusual set of circumstances.

If it is the case that a request triggers some element of ‘the truth’ about the firm’s behaviour, where do they go from January 2013? That is the point at which the COLP and COFA roles become effective. Maybe this firm’s COLP (compliance officer for legal practice) nominee will be the person who responds to my request or maybe someone else is elected (!) to hold that responsibility. The COLP may act as guardian of compliance but cannot act alone or be the firm’s ‘moral compass’. To be effective and to thrive under outcomes-focused regulation (OFR), the business needs to develop the ability to look at its behaviour critically, to question practices and to seize the opportunity to use the not-so-pleasant experiences as a chance to develop.

OFR doesn’t mean accepting the blame when no wrong has been committed and it doesn’t mean conducting your work in an un-commercial fashion. But, for the customer-focused outcomes, it does mean being alive to the consequences of your actions. To use one of the responses given above, if your client is confused and doesn’t understand, then the explanation is not pitched at the right level. Take a moment, consider the information that has been given and ask whether it could be delivered differently.

I doubt the customer suspects the legal work is poor. It’s the method of delivery that has befuddled them. If you have a number of similar complaints, then you should be looking to influence change. It could be one person, a training style or a standard letter that needs a makeover but sometimes it goes deeper than that.

The challenge for any COLP is possessing the ability (and nerve) to speak truth to power. That power can come in many forms ranging from the senior partner to the fiery young paralegal to the family owned firm staffed by relatives. When I ask for feedback from firms, it is because I generally have negative views from customers or employees, although I recognise that the feedback may come from a small percentage of cases run by a firm and it’s possible that everybody can have an ‘off’ day that isn’t indicative of their general behaviour.

You don’t have to look far outside of the law for examples of the powerful not listening; Lance Armstrong is alleged to have had so much power within ‘Team Armstrong’ that he was able to influence the careers of fellow athletes. Reports suggest that if you weren’t onboard with what went on, you were overboard; a culture of fear influenced and drove unacceptable behaviours.

Then there is the BBC, an organisation filled with reporting lines and hierarchies that was virtually swimming in information. But despite the bottom-to-top reporting lines, information was not shared between divisions and it appears that sufficient weight was not placed on the information that they had; the culture of personality produced powerful individuals who appear to have been able to act without consequence or censure.

A culture of fear, the presence of strong and powerful individuals and of individuals or businesses ignoring or listening but not hearing – headline-grabbing and horrific stories but if you boil away the content and listen to the themes, there are lessons for the legal environment.

When I give feedback to law firms (those that I work with, instruct and those that I encounter on the way), the information is given not with the intention of damaging an individual’s career or attacking the virtues of a law firm. It’s given because it is information about the service the law firm is providing. I don’t know a single legal business that yet represents the ‘finished product’. We all continue to learn, to develop and to evolve and we do that through the receipt and assessment of information.

In 2013 the responsibility to act on information becomes that of the COLP and they, along with their law firms, must ensure they control the information and learn from it.

If they don’t, the COLP may possess the ability to speak, to hold to account and to challenge. But if the power is not listening, what then?