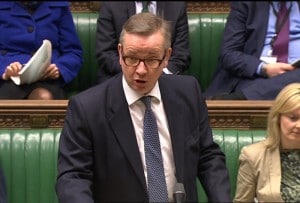 Michael Gove’s performance before the justice select committee yesterday [2] was a skilful one. Thoughtful, reasonable, non-dogmatic – two months into his time as Lord Chancellor and Secretary of State for Justice, he continues to win plaudits simply by virtue of not being Chris Grayling.

Coming into the evidence session having already scrapped two of his widely despised predecessor’s unpopular criminal justice policies – the prisoner book ban and the secure college for teenage offenders (aka the ‘modern-day Borstal’) – he made all the right noises and generally seemed far more engaged with his brief than Mr Grayling ever did.

He didn’t wait to be asked to bring up legal aid, acknowledging that the legal profession is not in revolt out of self-interest, but out of concern for access to justice. He promised to act if reviews of LASPO and court fees showed that rough justice was being meted out.

When such reviews will take place was not clear, however. In relation to court fees, he said more time needed to pass before a proper judgement could be passed.

Behind the emollience, there was nothing of substance. He still can, and did, use the excuse of only just having his feet under the table not to commit on anything. It’s easy enough to say you will act at some point in the future if the need arises, but the issues practitioners and their clients are facing are real and pressing today.

We don’t report on the detail of legal aid on this website – market transformation and regulatory issues are our interests in that part of the profession – but the evidence is stark. Just read yesterday’s High Court decision on the operation of the exceptional case funding scheme in civil work, in a case brought by the Official Solicitor because he was concerned that the scheme fails properly to deal with claims made by those who lack capacity. The ruling by Mr Justice Collins [3] provides a very clear exposition of how it is letting down the most vulnerable.

Even more telling yesterday, though, was Mr Gove’s description of the pressure on the Ministry of Justice’s unprotected budget as his biggest problem. That greatly restricts any room for manoeuvre he may be looking for. He might be willing to sit down and talk to the profession rather than face strike action, but what is the point if he cannot or will not move on legal aid pay rates?

Where Mr Gove fell down very badly – indeed, I would suggest unforgivably – was in totally ignoring solicitors while praising the criminal Bar to the skies. Maintaining a healthy independent criminal Bar is one of his “top priorities”, apparently. It was much the same in his first policy speech [4] last month.

I really mean ‘totally’. In 95 minutes, the only mention of the word ‘solicitor’ was in the context of them seeking referral fees from barristers for criminal work – a practice Mr Gove pledged last week he would stamp out because of the damage it does to the Bar.

Other than that, it was as if solicitors do not make up the large bulk of the legal profession, and are not the people spending their days in magistrates’ courts and nights in police stations keeping the rusty wheels of the justice system turning. The way he was talking, you would think that only barristers have a claim to the majesty of the law.

It was either an appalling oversight or a naked attempt to divide the criminal lawyer fraternity (as well as yet another display of the political power of the Bar). Either way, it did Mr Gove no credit and will only serve to stiffen the resolve of striking solicitors.