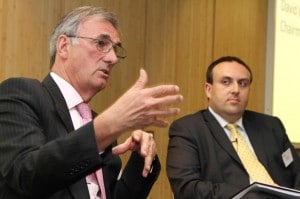 David Edmonds in action at a Legal Futures conference

If regulators are not loved by those they regulate, then it is no surprise to find that the regulator of regulators is even less loved. And so I don’t imagine that beyond the offices of the Legal Services Board (LSB), many tears will be shed that David Edmonds’ second and final term of office is up today. There may, indeed, be some sighs of relief.

Six years heading up the LSB is enough for anyone given the battles that have had to be fought in that time. And Mr Edmonds has always been up for them.

He unsurprisingly looks back on his period of office with pride, and with good reason.

Charged with bringing to life what is now universally agreed to be a very imperfect Act of Parliament, he, his board members and staff have delivered the core objectives – the Legal Ombudsman, independent regulation and alternative business structures (ABSs).

Let’s take them in turn. Most of the credit for the ombudsman’s success should of course go to its own board and senior management, but the LSB is ultimately responsible and should take its share.

The LSB has arguably achieved as much as it can on independent regulation within the confines of the Act, but it has been one hell of a struggle and the end result is far from satisfactory. Mr Edmonds believes a radical new approach is needed, and I have explained before how I think so too.

In truth it is still too early to judge the success or otherwise of ABSs, and while he perhaps overstates their impact to date, he is right to say that none of the objections that were vocally made to their creation have (yet) been shown to have any weight. Plus the LSB has pushed the SRA to improve its licensing process perhaps quicker than might otherwise have happened.

His speech yesterday hinted at regret that the LSB did not take the lead on reforming education and training – it was all set to before Charles Plant and Baroness Deech demanded that they create the Legal Education and Training Review instead – but he will, I suspect, be pleased by the zeal the SRA is showing in taking it forward; less so (but this will not surprise him) by the Bar Standards Board’s far lower level of zeal.

In developing a proper research base, the LSB is doing the legal market a big favour, but criminal lawyers do not think the same of the pressure it brought to bear that led to the Quality Assurance Scheme for Advocates. Its directive to introduce diversity reporting is almost as unpopular.

Outcomes-focused regulation, again an LSB hobbyhorse, also has plenty of critics, but as Mr Edmonds explained yesterday, it has yet to be seen through properly into slimmed-down rule books. Then maybe the profession will see the benefits?

A notable failure of Mr Edmonds’ time at the LSB has been its total inaction over public legal education, given that one of the core regulatory objectives in the Act is “increasing public understanding of the citizen’s legal rights and duties”.

Personally I have always found Mr Edmonds challenging (in a good way) and direct, and have appreciated his participation in Legal Futures events – and even, a couple of times, in leaving comments on stories on this site.

That he never agreed to open up LSB meetings, at least to some degree, to public view was a shame and a source of a continuing disagreement we had (along with the LSB’s related and unhelpful attitude towards publishing its own board papers in a timely fashion). It has always seemed at odds with the transparency the LSB demands of those it oversees.

So the mantle passes to Sir Michael Pitt, whose tenure will be shaped by the Ministry of Justice’s response to last year’s review of regulation. Despite the lawyer lobbying, it is surely inconceivable that the government will abolish the LSB, but equally it may well not sign up to the board’s own vision of moving (albeit over time) towards creating a new single regulator and, effectively, a new Legal Services Act.

Will he want to fight some of the battles Mr Edmonds was still spoiling for, even as he headed back to his other appointments and worries over Fulham’s Premier League survival? It was interesting that Mr Edmonds used his final speech to raise once more the question of whether representative bodies should still be entitled to funding out of the compulsory practising fees meant to pay for regulation. How Sir Michael deals with an issue that causes cold sweats at Chancery Lane and other HQs will give us a good idea of his approach.

Given the entrenched positions that have formed in recent years, it is opportune that as well as the LSB, changes at the top of many of the other key bodies in the legal world have either occurred recently (the new chief executive of the SRA) or are set to in the next few months (new chief executives for the Law Society and Chartered Institute of Legal Executives, and new chairs for the SRA and BSB).

As we head into the post-Edmonds era, it should give everyone a chance to take a breath and, to some extent, start afresh.