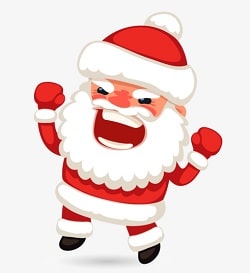 Santa was not happy about GDPR

“Just so I’m crystal clear on this,” said Santa, with just a hint of frustration in his voice, “you’re telling me that, from May next year, I can’t use my database of good and naughty boys and girls unless I spend Mrs Claus’s Christmas money on GDPR consultants?”

The board meeting of Claus Logistics at the North Pole was not going well and Muggins, the legal & compliance elf, was shifting uneasily in his little pine seat. “With respect, Mr Claus, I’m not sure you’re allowed to refer to them as boys and girls any longer because I heard a bloke on Polar FM and he was saying…”

“Enough!” said Santa with a look that could melt the frost on a reindeer’s muzzle. “At the risk of misquoting Monty Python, I don’t care a tinker’s cuss for all this red tape.

“I’ve got 1.9 billion kids out there waiting for tangerines and I can’t believe it’s GDPR that keeps them awake on Christmas Eve. Besides, what’s the point of our Google joint venture if we can’t mine the search data?”

“Again, with the greatest of respect, Mr Claus, I’m not the one who makes the law,” said Muggins.

“And if you recall, it was your idea to move our registered office to London to take advantage of the benign corporation tax rates. It was also you who moved our data back-ups to a European data centre to improve our cyber security. If you hadn’t dropped your smartphone over North Korea last Christmas, we could’ve carried on using the Amstrad in the postroom.”

Muggins was emboldened by the murmur of support from his fellow elves and decided to push home the advantage. He straightened his pointy green hat and leaned closer to the table, in the style of a football coach during a half-time pep-talk.

“Besides, Mr Claus, in my humble opinion, I consider the fundamental objectives of the EU directive are broadly positive. I don’t know about the rest of my colleagues round the table, but I’m getting extremely fed up with the daily nuisance calls from parcel delivery companies.”

Santa’s rosy cheeks flushed darker than normal as he glanced around the room. In typical fashion, Coldheart, the HR elf, was gazing out the window at the sleet and wondering if her sleigh would start, while Skinflint, the finance elf, had his head buried in the FT Online. They may be OK at wrapping presents, Santa thought, but they can be a spineless bunch at times.

“OK,” Santa said at last. “Here’s what we’re going to do. I want you all to spend the weekend reading the ICO’s Guide to the General Data Protection Regulation and when we meet on Monday, I will hand you each a mince pie. Whoever finds the hidden sixpence gets the job of data protection officer.”

Even for Santa, it was a master-stroke. Flip-flop, the non-exec elf, turned pale at the mere thought of the personal risk and left the table to be sick in a delivery sack. The smug smile on Muggins’ face evaporated as all eyes in the room bored into him.

“No shocks to the chairman,” Muggins mused to himself. “Even Tiny Tim wouldn’t have fallen for that one.”

He was packing his satchel to leave the room when Mrs Claus arrived with a large silver tray heaped with warm mince pies and mulled wine. In an instant, the mood lifted, and Santa let out a jovial “ho, ho, ho!”

“Let us all remain customer-focused and true to our vision and shared values during this key trading period,” said Santa, trying to salvage the board agenda, and, as if with one voice, all the elves responded, “Yeah, Santa, let’s do this!”

Muggins raised a sheepish eye from his cup of mulled wine. “God bless us everyone!” he said and they all laughed out loud at his wondrous ability to pull anachronistic references from Dickensian classics.