To mark Mental Health Awareness Week, the theme of which this year is body image, we have teamed up with LawCare to run blogs on each of the next three days to highlight different aspects of mental health. This one was written by an anonymous City solicitor. 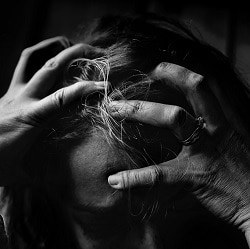 I’m a 6’3” 30-year-old man. I grew up in a loving family, studied at a decent university and am a solicitor in the City. I’m not shackled by a mortgage, nor do I have small mouths to feed.

Life has dealt me a fantastic hand and, trust me, I know it.

You’d be hard pushed to guess this about me though – I’m in eating disorder recovery.

It’s not a secret. But my gut tells me you wouldn’t select me from a line-up. That’s sort of the point; you can’t see a mental health condition. And that’s what anorexia, orthorexia, bulimia etc are. They aren’t about food, throwing up or being thin. Not really.

Neither are they linear. I’m yet to come across anyone in recovery who hasn’t dabbled in most camps.

Naturally there are physical symptoms. Left untreated these can be fatal. But remedying them isn’t even half the battle. Not if you’re after more than a bit of temporary respite.

You see my illness stems from a place much deeper, much darker in my mind. I didn’t appreciate that until well into my second stint in treatment.

My condition sprang from an underlying sense of worthlessness. Feeling so out of control, I could no longer think logically. I felt like an imposter in all walks of life; at work, amongst friends and in my family.

Even when I was on my knees in treatment – broken physically and mentally – my eating disorder’s message didn’t waiver. It convinced me I wasn’t thin or ill enough. It told me I was unworthy, that I was sapping valuable resources from someone more deserving.

I was a failure who deserved no better. My only shot at happiness was by keeling to its demands.

Except that, as you’ve probably clocked by now, neither ridiculously low BMI nor chiseled abs were going to make that disappear. And you’d be right. But I didn’t know it. I couldn’t see it.

My heart would break if I had to watch someone I loved suffered that sort of anguish. Yet still I continued to self-inflict, certain that the pain would eventually end.

But an eating disorder can’t be completed. The carrot at the end of the stick can’t be reached. There’s no final level. No, I’d have died. Sounds melodramatic. But it is true.

Primarily I’m anorexic, regardless of my weight. It is a state of mind. A driving compulsion to restrict or purge in the hopeless pursuit of empty promises.

I dabbled in bulimia too. Thankfully help was at hand before the two-fingers-down-the-throat manoeuvre took over. Throwing up is joyless at the best of time and it’s no more pleasant self-induced. Still, when my illness told me it would bring me what I wanted, who was I to argue?

Instead, I largely purged through exercise. I ran. And ran. And ran. Having finished the 2016 London marathon, I popped for lunch with family. But despite ploughing through more than 26 miles, the guilt I felt at eating my post-race meal was intolerable.

So I did what any normal person would do; made my excuses and hit the gym, justifying this as a warm-down session.

It was a pretty hopeless place. I gave it every ounce of time, headspace and energy I could muster. I was desperate to regain control. It was compulsive – the cruelly ironic twist being that I was completely at its behest.

It was all consuming. It took priority over everything in my life. There was no room for anything or anyone else. I isolated myself, even from the person who I lived with and loved the most.

Without proper nutrition, my brain couldn’t concentrate on anything I was doing or anything anyone said to me. I was going through the motions. Alive but not living.

Twelve months on and I’m in a much better place. I’m no wellness poster boy and it is far from perfect. But I am not striving for that anymore. There’s no quick fix or magic pill to pop. It’s a long hard slog, requiring considerable time, dedication and effort.

Unlike recovery from alcoholism or drug addiction, my recovery isn’t abstinence based. The things that previously held so much fear, so much power over me, must be faced multiple times daily. It’s a full-time vocation.

I’ll always be powerless over my first thought. But now I’ve now got the tools to help me deal with them in a healthier way.

I write it down. I talk to my therapist. I reach out to someone in recovery. I meditate. I work out what is within my control and try to let go of the rest. So simple. So incredibly powerful.

I don’t always choose well. I make good and bad decisions. But I accept that and am kind to myself. The best times come when I let go. I can live in the moment and be present.

When I overthink, preempt or try to control things, I get anxious and my recovery stalls. And it’s OK for this to happen at times as well.

It is all about getting my priorities right. If I don’t put my recovery first – before absolutely everything else – I am in trouble. If that part of my life slips, the rest will quickly come crashing down around me.

It isn’t being selfish. It’s about making sure I am OK. That doesn’t come naturally to me as I am a people pleaser. But I am learning that putting myself first is the only way I can be available for anything else.

Putting boundaries in place is agonising, but it gets a little more easy each time I am able to do it.

And I am one of the lucky ones. I have the support and understanding of those around me, both in my private life and at work.

But I know it isn’t like that everywhere. I just hope one day it will be.