Portrait of the male barrister as an opponent

A guest blog by Sheryn Omeri, a barrister at Cloisters Chambers 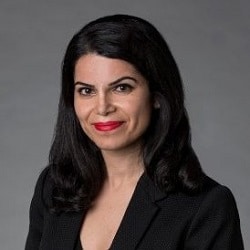 Omeri: This sort of behaviour just brings the Bar into disrepute in the eyes of the public

I recently came to the end of a multi-day employment law case. My opponent was everything one might have traditionally expected a barrister to be: white, male, apparently public school educated and wearing a pinky ring to assure us he was of the right pedigree.

From the moment I introduced myself with a smile on the first morning of the case (as I always do), he immediately assumed an over-familiarity with me, accompanied by a mean-spirited jocularity which I doubted he would have assumed had I been a fellow male barrister.

On the second day of the case, after I had finished cross-examining his client, he approached me as the parties were leaving the tribunal room.

He began an apparently casual conversation with the innocuous comment “It got awfully warm in there this afternoon”, to which I started to respond with an equally innocuous observation about the air-conditioning being switched off.

Before I could finish my sentence, he retorted with “It must have been all your hot air”. The latter was uttered in a public space, and perhaps more significantly, in front of my instructing solicitor and client.

The aim of the persistent over-familiarity and jocularity had been obvious: psych her out to throw her off her game – get an easy rise out of her because everyone knows women are slaves to their emotions and do not belong in a profession which concerns itself with reason and logical argument. The fact they try their hands at it is hilarious.

While that experience was what ultimately prompted me to write this piece, it was just the most recent in a series of such experiences with male opponents who seem simply unable to interact civilly with women barristers, though no doubt they would not see it that way.

On a previous occasion, among other patronising comments, a male opponent said to me (again in front of my instructing solicitor) “You don’t understand”.

Interesting, I thought to myself at the time. My understanding cannot have been so deficient since I had just won the trial and we were discussing remedy. My instructing solicitor later said to me: “God, he was so arrogant. It was great the way you shut him down.”

In a much more recent case, a male opponent sent me an email into which both his leader and mine were copied which began: “Dear Sheryn, I am afraid you have not understood…”

Though women are often taught simply to ignore such behaviour and continue to be ‘nice’, on that occasion I felt that while I could do the latter, I could not do the former.

I replied, beginning as follows: “Dear X, In future, kindly refrain from telling me what I have or have not understood. This sort of language, often used by male barristers toward their women colleagues, is patronising and unnecessary.”

To his credit, that male barrister wrote back nine minutes later to apologise for his previous email.

On another occasion, at a telephone hearing, when the judge asked which of us was going to address him first, my opponent said that he would “be chivalrous” and “allow” me to speak first.

Given that I was acting for the claimant in that case and it was she who was making an application to the court, chivalry did not seem relevant. It was the practice that I speak first.

Yet, instead of pointing this out to my learned friend, our male judge simply replied “Why that is terribly chivalrous of you”, and continued joking with my opponent about chivalry, confirming the entrenched male view that women may only speak when men allow them, and when they do it is an act of chivalry worthy of praise.

I have also been involved in cases in which there were pre-trial settlement discussions and immediately upon discovering that I would not be bullied into advising my client to settle if this were not squarely in his/her/its interests, my male opponents have raised their voices, and become visibly irritated as though they approached the negotiations assuming that a woman opponent would be more easily ‘persuaded’.

There are more examples. None of them is significant on its own. My women predecessors had it much worse at the Bar in earlier times.

One woman judge I knew told me that, when she was a young barrister and applied to join a particular chambers, she was told in terms that chambers was “no place for a woman”.

Several years later, when she had shown herself to be a star barrister, the same chambers extended an invitation to her to join.

Perhaps as a reflection of how times have changed, when she repeated this story to me recently, her youngest daughter who was also listening said: “I hope you told them to shove it, Mum.”

However, in my view, there are two points to be drawn from the experiences I have described. The first is that low-level but persistent attempts to belittle women barristers when they are simply going about their work is unacceptable.

While none of it bothers me personally because I am always up for the good fight, I can understand the arguably more rational view which I imagine many women hold that life is just too short.

So when the reasons why women leave the Bar are considered, it should not be thought that this is solely due to the pressures of motherhood or the incompatibility of life at the Bar with motherhood.

There is also a culture at the Bar which is unwelcoming to women, regardless of whether or not they have children.

Secondly, this sort of behaviour just brings the Bar into disrepute in the eyes of the public. My witnesses in the case I described at the start of this piece were all educated, senior managers (some very senior indeed). The most senior among them were women.

They did not recognise my opponent as anything other than an anachronism. His behaviour did not seem in keeping with the modern Britain in which they lived and worked.

I imagine that had I, or someone equally different from my opponent, not been involved in the case to give some balance, they would have walked away from proceedings feeling that the Bar and barristers were a social irrelevance, only to be interacted with when one had no other choice.

It is this which I find most troubling. I find it troubling because I love my profession. I believe it to be not only relevant to the modern age but also vital to the administration of justice – not simply at the stage of being in court, but in the valuable input barristers are able to provide into the formulation and passage of proposed legislation.

It should not be brought into disrepute by displays of old-fashioned entitlement and disdain for what is different from the white male stereotype – especially in the context of employment law, which also concerns itself with discrimination.

And I do not forget the encouragement I received in my legal career from Australia’s most brilliant barrister, Bret Walker SC, who saw something in me from the earliest time, when I was still a law student. Without regard to my sex, Bret taught me both courage and belief in my ability to be a good lawyer for which I will be eternally grateful.

But there is no excuse for the arrogant, patronising behaviour displayed by the others I have described and heard described by my women barrister colleagues. It is time for the Bar Council to step up and do something about this.

Barristers of today are the judges of tomorrow, sitting in judgment on a great variety of people and interacting with barristers of different sexes, races, religions, sexual orientations and socio-economic backgrounds.

It is not acceptable for them to take to that very important role, the views which such behaviour reflects.

I would be interested to hear about the experiences of more women barristers and happy to feed this (anonymously) to the Bar Council. Please do contact me however you feel comfortable.

The Bar needs to keep pace with the rest of society in being a welcoming, healthy working environment for women. In fact, it must do more than this – it must be a leader in the implementation of the principles of equality and diversity.

*In relation to the proceedings I described at the outset of this piece – my client was successful, with the judge finding that my opponent’s client had been “unreasonable” and had made allegations which were “petty” and “ludicrous”.