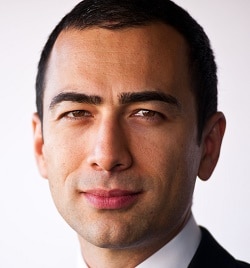 Yunusov: the trend is towards structuring affairs to minimise complexity and ambiguity

Tech is famous for its shorter and shorter hype cycles. Robot lawyers were all over the twitters only a few months ago and now people actually yell at you for even mentioning the thing. Of course, robot lawyers should not even have surfaced in the first place because no one is remotely close to building them. Lawyers should not fear for their livelihoods.

But there is something that is much more important than robot lawyers. It’s robot clients. Or at least the proliferation of machines, automated transactions, and standardized processes where lawyers once controlled the terrain.

Let’s start with an easy example. Self-driving cars promise a huge decline in accident rates. You know what this means for the personal injury industry? And this is not even super-long-term. Expect an under-60-year horizon for most cars to be autonomous.

A more complex example is migration of financial transactions to blockchain. One of its features is that all transaction evidence is unambiguous, conclusive, and independent. Litigation (besides the frivolous kind) exists only for two reasons: disputed facts or, more rarely, disputed law. If blockchain tools become truly ubiquitous and if selling or lending off-blockchain becomes like going to an illegal dentist to get your teeth done, then much of litigation will wither and die.

As you can probably see by now, it’s not really about robot clients. It’s about clients using machines and automation to structure their affairs to reduce complexity and ambiguity. Which are the two main sources of living for lawyers.

A common example of automating a transaction to eliminate complexity and ambiguity is a vending machine. It is a rare exception when something is in dispute with a vending machine. If the mechanical and payment parts work (and they usually do), the machine is guaranteed to dispense the product after you deposit your money. People who write about ‘smart contracts’ like this example.

Or imagine a ‘smart land registry’ that runs all the searches automatically. Imagine it working in conjunction with an autonomous home-inspector drone. Result: a conclusive and unambiguous report of the state of the title and physical property. Take it to the next level and imagine the property automatically reporting its state to an independent registry, which would release the data only on vendor’s request. And imagine the price of properties that don’t participate in this system. So much litigation disappearing.

Even when the tech industry does not completely automate a process, it automates or formalises it as much as possible. The idea is that a good product holds your hand through the transaction making it seamless. That’s why Uber is so popular. The less people interact, the less likely they are to litigate. But they still get the job done together with machines serving as intermediaries. Machines will either take over many tasks or they will babysit humans through tasks to minimise the oscillations of the exalted but oh-so-expensive free will.

If I were to say one thing in this blog, it would be this: the trend is towards structuring affairs to minimise complexity and ambiguity and to circumvent regulation.

The remaining lawyers will focus on truly complex, unusual transactions; the little regulation that tech has not been able to circumvent; and litigation over law (just what you thought you would do when you were reading all those appellate decisions in law school, remember?)