My eating disorder nearly cost me my life

To mark Mental Health Awareness Week, the theme of which this year is body image, we have teamed up with LawCare to run blogs on aspects of mental wellbeing. This one is written by Gabriella Wickes, the corporate responsibility adviser, and founder and chair of the mental health and wellbeing network at City firm Slaughter and May. 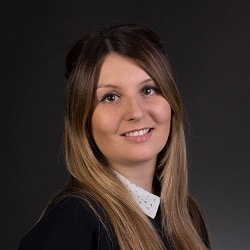 Wickes: The only way to challenge the stigma around mental illness is to encourage conversation

University often elicits feelings of excitement and anxiety in equal measure: new cities, new friends and new experiences. These are both familiar and normal feelings but, for me, they quickly spiralled into something more insidious.

The interesting thing about mental ill-health is that it often appears as harmless quirks, indistinguishable from a person’s personality.

My eating disorder, and my anxiety, began with a simple diet, but it wasn’t long before checking calories turned into a behaviour that nearly caused me to go into cardiac arrest.

Looking back, it’s hard to identify the process, but somewhere along the line eating turned to overthinking—and that’s the way it stayed for seven years.

This continued well into my working life, where my eating disorder and anxiety went entirely unnoticed, even though my behaviour had become increasingly bizarre.

My focus at work went out of the window and was replaced with anxiety and self-doubt. I was wearing a mask to hide what was really going on beneath the surface. My daily routine became overwhelming and I would struggle each lunchtime with what decisions to make.

To eat lunch or not to eat lunch; how to hide it if I wasn’t eating; plans to side-step lunch invitations and meals with co-workers; what excuses to make when it was a working lunch and how I would be expected to at least eat something.

My eating disorder had quickly become my second job, and life had become overwhelming – most nights I wished that I wouldn’t wake up in the morning.

It’s not hard to guess that a life like this isn’t sustainable. In 2015, I was signed off work and I eventually began to get the help I needed. I was diagnosed with anorexia nervosa and anxiety disorder.

After intense CBT (cognitive behavioural therapy) for over a year, it slowly dawned on me how close my ‘habits’ had come to killing me. I was shocked. My eating disorder was my coping mechanism, I was in control of it, surely? However, my psychologist informed me that I was undoubtedly one of the worst cases they had encountered.

My recovery began in 2015 and continues to this day. At the beginning of my recovery, I realised just how much of my personality had been eroded. I started to re-engage with my old hobbies and picked up new ones. I played at open mic nights, began drawing again, and volunteered at a local museum.

I slowly began to take off the mask. I finally opened up to my family and friends and was met with unwavering support and love. I have no words to describe what their support meant to me: in many ways, it saved me.

In 2016, I started my role at Slaughter and May. I was honest about my anxiety and anorexia from the start, and I have been overwhelmed by the support that I have found here.

My manager is someone who has a natural talent for recognising when there is something more to a throwaway comment like “I’m fine”. She reduces hours of anxiety into a five-minute chat over tea in the staff restaurant, and encourages me to trust my better instincts and knows when something is up. Just knowing that someone has my back is invaluable.

I believe, whether it is in the workplace or your personal life, that everyone should feel confident addressing their own mental health.

My eating disorder nearly cost me my life. Anorexia nervosa has the highest mortality rate of any mental illness—a fact that contrasts sharply with many of the misconceptions that surround it.

Similarly, mental ill-health is frequently misunderstood in society, and in the workplace, and it still faces huge amounts of stigma. The only way to change that is to encourage conversation and it’s a conversation that needs to start now.

The first blog in this series can be found here.