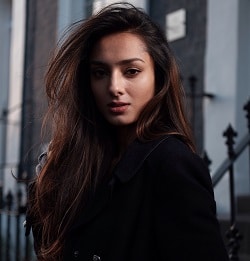 Ayomide Akin-Oteniya recently organised an event at Hogan Lovells called ‘The industry of aspiring lawyers’, celebrating diversity in the legal industry. The event was comprised of a number of talks for aspiring lawyers, most notably on how technology has diversified the provision of legal services.

In the last 20 years, the legal industry has changed considerably and possibly the most interesting change in recent times has been the types of people who are now becoming lawyers.

Law almost exclusively used to be the preserve of individuals who had studied the LLB or humanities subjects. Ex-scientists, engineers and mathematicians who are switching to the legal sector bring with them a range of new skills and ways of thinking that have not been seen in the industry before.

As a result, individuals with a deeper understanding of technology and data, as well as the law, are changing the way the law is done. We can see this in the uptake of new technologies in the last year alone; Kira Systems, the brainchild of a lawyer and computer scientist, has already been adopted by Clifford Chance. The software can search and analyse agreements in a fraction of the time that it would take a human.

Similarly, Ross Intelligence was also created by a lawyer and a computer scientist. Currently used by Dentons, Latham & Watkins and BakerHostetler, Ross allows lawyers to ask questions in plain English and receive an answer based on the law. Ross and Kira Systems are the first in what is likely to be a long line of innovative AI-based legaltech solutions that ‘learn’ and get smarter the more often they are used.

Lawyers are notorious for being risk averse and slow to adapt to change. As a result, the legal sector has languished in terms of innovation and modernisation – the concept of law firms existing as corporate entities is a relatively new development that has only taken place in the last 15 years.

The T-shaped employee is a phrase that has been around since the early 1990s. The idea is that the employee has a deep knowledge in one discipline and a wide breadth of knowledge across multiple disciplines that allow them to bring new and innovative ways of thinking to their job. Although the phrase arose in the IT industry, it is equally applicable to the law. 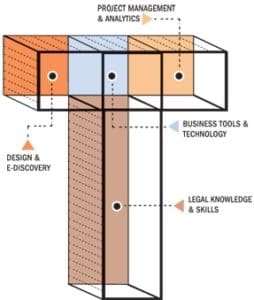 A T-shaped lawyer not only has extensive legal knowledge and skills, but also possesses skills in other areas relevant to practising law in the 21st century, such as e-disclosure, technology, project management and data analytics.

Big Data is a phrase we often hear these days, but what does it mean? People create new data every second; around 40,000 searches are carried out every second on Google, which equates to 3.5bn searches per day and 1.2 trillion per year. In the past two years alone, more data has been created than in the entire previous history of the human race.

Earlier this year, in a landmark ruling, a High Court judge backed the use of predictive coding in the e-disclosure process. Predictive coding software analyses a small initial batch of documents picked by a lawyer to create a further sample for review. The software ‘learns’ which documents are relevant and which are not and uses these rules to identify relevant documents from a large dataset far more accurately and faster than a human lawyer.

Master Matthews said the technology could be used in the case of Pyrrho Investments v MWB Property, “in light of the ‘enormous’ expense of manually searching through the three million electronic documents involved.”

Predictive coding technology was first approved in the US in 2013 and endorsed in Ireland last year. With the Jackson reforms’ focus on controlling the costs of litigation – and disclosure being a major source of costs building in many cases – predictive coding could well become more common and lawyers will have to become more comfortable using the technology.

Legal suppliers have already caught on to this; the number of companies offering e-disclosure, cloud storage and document automation software at legal services trade shows such as British Legal Technology Forum and LegalEx is increasing year on year.

The market value for e-disclosure alone is estimated at around $5.5bn, and those with the legal knowledge and technology skills to create innovative new products that save lawyers time and reduce costs, have an opportunity to make vast amounts of money.

It is important to remember that law firms are businesses and skills that help to innovate or improve business processes are an asset in an industry where a lot of those practicing law are adhering to the old I-shaped model – a deep legal knowledge and not much else.

Unfortunately, the overwhelming majority of universities in the UK are teaching to the old I-shaped model; only a handful (Ulster, Newcastle and the University of Law) have research groups or classes dedicated to teaching and exploring legal innovation and technologies.

By contrast, some universities in the US are already offering detailed courses in these areas. Daniel Martin Katz teaches quantitative methods and legal analytics at Chicago Kent College of Law, introducing students to statistical analysis, R programming and machine learning.

Given the enormity of this year’s Panama Papers and World Anti-Doping Authority data leaks, these skills are invaluable in the 21st century. If the uptake of new technologies and processes at top firms such as Clifford Chance and Dentons are anything to go by, aspiring lawyers looking to stay ahead of the competition for training contracts will need to invest time in developing their technical and business skills.

If you can code, build an app or analyse data, you already have something to offer that a lot of other applicants cannot.