Lessons from a Glasgow charity shop 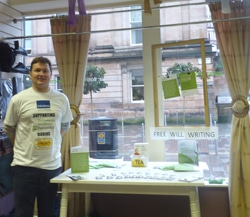 Iain Witheyman, who will shortly begin his training contract with Inksters, mans the Barnardo's kiosk

“Charity shops beware?” asked Viv Williams in his blog last week, wondering if legal brands might replace charity shops as the ubiquitous face of the high street. With QualitySolicitors, Lawyers2you, face2face solicitors and the rest all vying to build the solicitor brand, it is not beyond the bounds of possibility.

Well, the charity shops are already hitting back. Kind of. Last week innovative Scottish solicitor Brian Inkster – whose Glasgow firm Inksters is particularly well known for its effective use of technology and social media – set up what he calls a “pop-up wills kiosk” in a Barnardo’s shop in the city, during Remember a Charity week.

As you can see, even calling it a pop-up kiosk is over-egging the pudding – it’s a table at the front of the shop with leaflets on it. But that’s not the point. The idea was to create “an approachable and accessible way for members of the public to speak with Inksters staff about making or renewing their will”, Mr Inkster explains. I imagine it was a more amenable atmosphere than a shopping centre or WH Smith store as well.

And the results were pretty impressive, given that the ‘kiosk’ was not in a high footfall area like a shopping centre. It was manned for about 20 hours between Monday and Saturday, the first three days of which saw atrocious weather, and generated 20 fee-earning wills – 16 of which were for over-55s eligible for a ‘free’ will (free to the testator but Inksters is paid by Barnardo’s) –  nine other possible wills, and enquiries about property and family services Inksters offer. You can be sure that Inksters will be cross-selling to its new clients as well.

The initiative – the first time the firm has tried offering this kind of service – was accompanied by a week-long Twitter campaign that Mr Inkster says generated fresh enquires about will-writing from across Scotland.

“What it shows is that you don’t need to be part of a franchise,” he argues. “There’s no reason why any firm anywhere can’t seize these opportunities and put the money [they would spend on a franchise] into doing these kinds of things themselves. We’ve shown that it’s a good way of generating good business.” Of course, it’s not quite that black and white because it depends on the individual firm, what it wants and what it has the resources to do.

Nonetheless, the Inksters experiment is an example of how law firms can, with only a small investment, bind themselves more closely into their local communities. I always use the example of my village summer fair, attended by hundreds of local residents and several local businesses, such as estate agents, but never a law firm. Mr Inkster has potentially gained a lot of new business by going to the clients, rather than waiting for them to come to him. Access to justice is not just an abstract concept – it means physical access too.

That is not to say the legal brands cannot do this too. As well as its shopping centre stands, Lawyer2you has a gazebo that it takes round to all sorts of community events, from equestrian events to biker rallies to gay pride celebrations. That’s a great idea, if you ask me.

The conventional wisdom is that the continuing advantage law firms will have over big brand new entrants to the market is their personal service. Research being released at next month’s Legal Futures Conference confirms how much value consumers still put on face-to-face contact with their lawyer. Whatever a firm’s chosen model in the future – whether WH Smith or the local charity shop – the key is surely being out there explaining this in the face of the new competition, rather than sitting back and waiting for the clients to roll in as in decades past.