Is this the deal to silence QS’s critics? 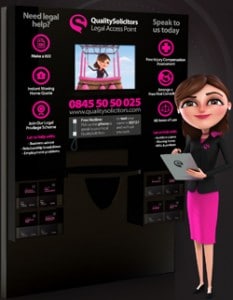 New branding: the legal access points will stay but Miss QS is facing the chop

You’ve got to hand it to Craig Holt – he keeps pulling rabbits out of his hat. To what will no doubt be the chagrin of its many critics, QualitySolicitors (QS) has surely announced itself on the big stage by securing investment from a private equity firm. We did well to get him to the Legal Futures conference on Monday, it turns out, as he was in the middle of signing piles of documents to finalise the deal.

No longer reliant purely on the money it makes from the network firms, QS can invest the millions Mr Holt reckons it will need to build a national network and genuinely recognised brand. He won’t say how much Palamon Capital Partners is putting in, but observes that the company’s investments usually range from €10m (£8.8m) to €80m. They come from a €670m fund.

Sometimes one is a bit sceptical when people say they have private equity investment, because it could just be Uncle Bob and a couple of his mates from the pub/golf club. But Palamon is a serious, proper investor, with €1.1bn of funds under management, according to its website. Palamon’s solicitors, Slaughter and May, recently described it as “one of Europe’s leading mid-market private equity firms”.

Of particular relevance is that the company has experience of operating in fragmented professional services markets, specifically dentistry and independent financial advice.

Whatever Palamon is spending, it is less than the next private equity investor will have to, Mr Holt points out. If QS is already in the market, it will cost a lot of money to establish a rival brand to top it.

The money will surely allow QS to leap several steps in its development and get to the end point far quicker than its already rapid rate of growth would have achieved. It’s not so much getting the firms on board – especially with the added credibility this news will give QS – as building the infrastructure to support them. The goal of dominating the high street market, gaining a 30-40% share and having firms demonstrably different from non-QS competitors just became that much more realistic.

Thus the ‘conversion centre’ will take on the task of turning leads into actual instructions, the need for which rival brand Lawyers2you recognised some time ago with its ‘listening centre’, open seven days a week (nobody, it seems, wants to use the rather less appealing term ‘call centre’).

Sharing back-office facilities is likely to become an increasingly common theme – it’s also a key part of the consortium of law firms in south Wales planning to bid for a criminal legal aid contract – but one cannot help but wonder how far consolidation will go within the QS network. In a decade will it just be one single entity? Mr Holt, unsurprisingly, will not speculate that far.

We await QS’s new visual identity as the marketing spend cranks into action in the new year. Mr Holt tells me the brief has been “John Lewis meets Virgin”, with a “heavyweight, professional feel but without losing the modern and approachable look”. Goodbye animated Miss QS, it seems.

Anecdotally the word I hear about the WH Smith legal access points (LAPs) is generally positive. The ‘Legal Privilege’ card has been popular – most people walking into the shop do not have an immediate legal need, of course – and allows QS to build a powerful database.

Mr Holt says early indications are that the firms which are making the most of the tie-up will generate an extra £700,000 a year in profit costs, but he candidly admits that there are firms at the other end of the spectrum doing “nowhere near so well”. The best-performing LAP is bringing in 35 leads a day – as we reported recently, QS estimates it is getting 100,000 leads a month. But, of course, conversion is all.

It is hard not to be impressed by the march of QS, and Palamon’s investment is an independent stamp of approval of its business model and plans. Those who thought Mr Holt was in it for a quick buck have also been proven wrong.

But more than anything, while the many critics in the profession carp and moan, QS is just getting on with it (I’ve blogged before about why people seem to hate QS). Those critics may not be playing the part of Nero quite yet, but this news means the sparks have certainly been lit.